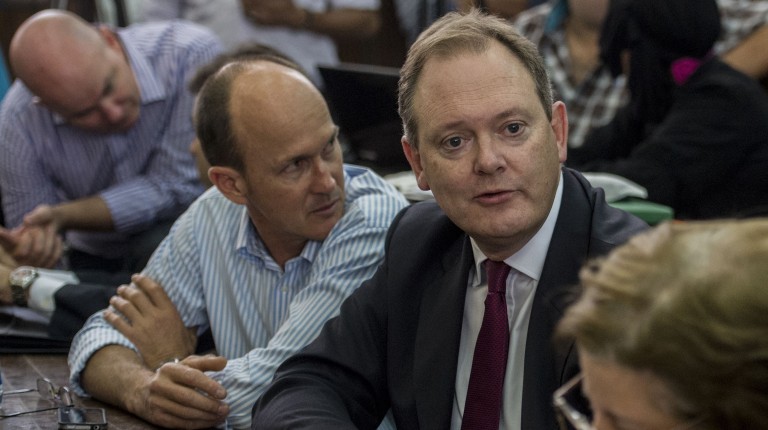 The conviction and sentencing of three Al Jazeera journalists and 15 other defendants has provoked an international firestorm of outrage and disbelief, both from nations and from human rights groups.

Fahmy, Greste, and Mohamed were sentenced to seven years each in a maximum security prison, while Mohamed received an additional three years on top of his sentence for possessing a used bullet casing at the time of his arrest.

Greste, an Australian, is one of four foreign defendants named in the case. Fahmy, recognized by the court only as an Egyptian, also holds Canadian citizenship.

The other foreigners, tried in absentia, are Britons Sue Turton and Dominic Kane, who have previously worked for Al Jazeera in Cairo, but were not in the country at the time of arrest. Dutch journalist Rena Netjes is also a defendant, but has never worked for Al Jazeera, and was allowed to leave Egypt following discussions between the Dutch embassy and the foreign ministry.

In a press conference after the Monday verdict, Australian Foreign Minister Julie Bishop said, “I’m sure we’re all shocked by this verdict, including [Australian] Prime Minister [Tony Abbott],” adding that she did not understand how the court could possibly come to that decision.

Most of the Australian government’s dealings with the case involved the interim government, said Bishop. They have only spoken to the government of President Abdel Fattah Al-Sissi once, but will follow up soon. Bishop also said she will call on allies in the region to defend Australians’ interests in Egypt.

Latvia, the country where Greste’s father was born, and Greste is a dual citizen, added to the chorus of international dissent over the verdict.

“The Foreign Ministry believes that the judicial process has not taken into account all the circumstances relating to Peter Greste’s detention, such as the lack of direct evidence,” said the Latvian Foreign Ministry in a statement. Latvia also said they would work with both the European Union (EU) and Australia “to promote freedom of expression [in Egypt]”.

While he is a dual citizen, the Canadian Embassy in Cairo said they gave Fahmy all the consular assistance they would have given someone with only Canadian citizenship.

The embassy praised the thorough work of Fahmy’s defence team, adding “we do not understand this verdict. We expect that this sentence will be appealed.”

British Foreign Secretary William Hague, who today summoned the Egyptian Ambassador to the United Kingdom Ashraf Elkholy, said he is “appalled by the guilty verdicts handed down today against Egyptian and international journalists in Egypt,” including British Al Jazeera journalists Sue Turton and Dominic Kane who were each given 10 years in absentia.

“I am particularly concerned by unacceptable procedural shortcomings during the trial process, including that key prosecution evidence was not made available to the defence team. Freedom of the press is a cornerstone of a stable and prosperous society,” said Hague.

“We have repeatedly raised this case and the restrictions on freedom of expression in Egypt with President Al-Sisi, the Egyptian Foreign Minister and wider authorities in Egypt,” said Hague.

Speaking at a press conference in Iraq, United States Secretary of State called the verdict in the Al Jazeera case “chilling and draconian.”

In response to the 10 year sentence given to Dutch journalist Rena Netjes in absentia, The Netherlands’ Ministry of Foreign Affairs said it is “very disappointed in the verdict.”

“The Netherlands takes this matter seriously. I have summoned the Egyptian ambassador to the Ministry and will discuss the matter today in [a scheduled meeting] Luxembourg with my EU colleagues,” said Dutch Foreign Minister Frans Timmermans.

Strong condemnation also came from Swedish Foreign Minister Carl Bildt for “the court decision to send foreign journalists to jail for years for their reporting”, even though there were no Swedes in the trial.

“Unfortunately, today’s verdict is not an aberration,” said Joe Stork, deputy director of HRW’s Middle East division. “In President Al-Sissi’s Egypt, simply practicing professional journalism is a crime, and the new constitution’s guarantees of free expression are not worth the paper they are written on.”

HRW also called on the Barack Obama administration to pressure Egypt, and not to “return to ‘business as usual’ so long as this transparent injustice prevails.”

“This is a devastating verdict for the men and their families, and a dark day for media freedom in Egypt, when journalists are being locked up and branded criminals or ‘terrorists’ simply for doing their job,” said Philip Luther, Director of the Middle East and North Africa at Amnesty International.

“The verdict provides further evidence that Egyptian authorities will stop at nothing in the ruthless campaign to crush anyone who challenges the official narrative, regardless of how questionable the evidence against them is.”

The Egyptian prosecutor’s  office called the verdict a “deterrent” in an official statement, but did not identify what it intended to deter, while Egyptian Ministry of Foreign Affairs spokesman Badel Abdelatty refused to comment on the trial, reiterating the independence of the judiciary.