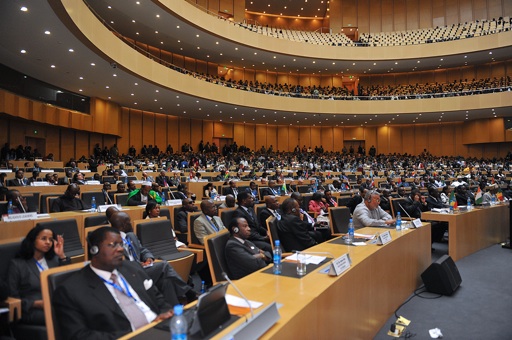 Egypt will participate in an African Union Summit this week in its first activity in the union since the lifting of an 11 month suspension.

Foreign Minister Sameh Shoukry left for Equatorial Guinea capital, Malabo, on Sunday to attend meetings of African Union foreign ministers scheduled for Monday in preparation for the Heads of State Summit on Thursday. President Abdel Fattah Al-Sisi is expected to address the opening session, as is traditional for a newly elected president of a member state.

Speaking about Egypt’s readmission to the AU, foreign ministry spokesman Badr Abdelatty said: “It is extremely important, we are proud to be an African country, it is a fact of history and geography.” He pointed out that both Egypt’s national security and economy is tied to Africa. “It is important to deepen relations [with Africa]”, said Abdelatty, adding that “strategic orientation” is needed to continue “building mutual interests on the ground for a win-win situation” through private investment from Egyptian companies.

The theme of the summit that officially started on Friday is “Agriculture and Food Security”, coinciding with the 10th anniversary of the launch of the New Partnership for Africa’s Development’s (NEPAD) Comprehensive Africa Agriculture Development Programme (CAADP), according to the foreign ministry. Egypt is a founding member of NEPAD along with South Africa, Nigeria, Algeria and Senegal.

The suspension was lifted last Tuesday following the presentation of a report compiled by the AU’s High Level Panel for Egypt to the Peace and Security Council (PSC). In January the panel, led by headed by Alpha Oumar Konaré, former President of the Republic of Mali, “affirmed the correctness” of the July 2013 decision by the PSC to suspend Egypt’s activities within the union when it presented a progress report. The council viewed Morsi’s removal as unconstitutional and a violation of its charter.

The panel also said in January that it hoped Egypt’s elections would mark the end of the transition period.