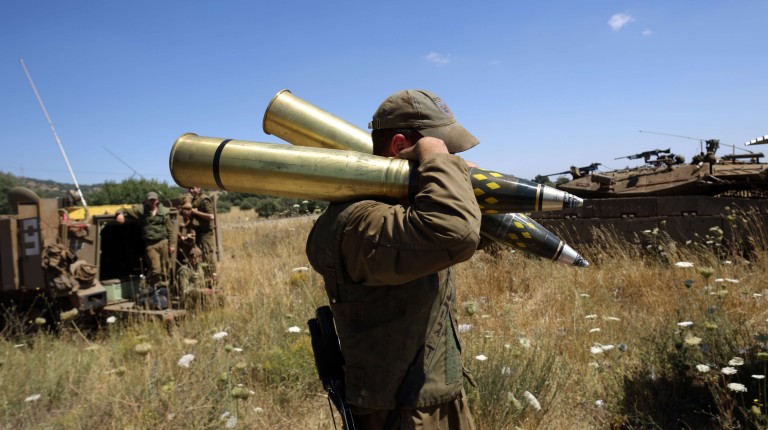 AFP – Israel carried out retaliatory air raids on Syrian army positions in the Golan Heights overnight after a teenager on the Israeli side was killed in an attack from Syria, the army said early Monday.

“The IDF [Israeli army] targeted nine Syrian army positions in response to the earlier attack that originated in Syria killing an Israeli teenager and injuring two other Israeli civilians,” an army spokesman said.

Sunday’s action marked the most serious escalation along the ceasefire line with Syria since the 1973 Middle East War, with Israel’s defence minister warning Damascus would pay a “high price” for helping militants bent on harming the Jewish state.

There were no reports of Syrian casualties.

The air raids came after the 13-year-old son of an Israeli defence ministry contractor was killed on the Golan on Sunday morning.

The Arab Israeli victim was named as Mohammed Qaraqra, from the northern village of Arabeh in the Galilee region, military radio said.

“Israel’s enemies will stop at nothing,” he told the dead boy’s grieving father by phone, his office said.

“They won’t stop at attacking civilians or even murdering children as happened this morning,” Netanyahu added.

Israel’s defence ministry said the boy was killed when a blast hit the car he was travelling in with his father and another contractor, both of whom were wounded.

Military sources said the vehicle belonged to the defence ministry and was being used “as part of construction work on the border”.

Lerner said the army was “not certain if it was an explosive device, a rocket or a mortar” that hit the car, noting there was a hole in the nearby fence.

“Yesterday’s attack was an unprovoked act of aggression against Israel… The IDF will not tolerate any attempt to breach Israel’s sovereignty and will act in order to safeguard the civilians of the State of Israel,” Lerner stressed.

“This is the most substantial incident on the border with Syria since the beginning of the civil war,” he said earlier, confirming it was the first death on the Israeli side.

Residents in northern Israel heard explosions from the Syrian side of the border, the Israeli news site Ynet reported.

The army spokesman told reporters that Israeli tanks had fired at Syrian army posts shortly after the attack from Syria.

Sunday’s fatal attack took place near Tel Khazeka, just south of Quneitra which is located in the centre of the Golan plateau.

The Syrian Observatory for Human Rights said there was ongoing fighting in the area between Syrian military and rebels, adding regime forces had bombarded some villages in the Quneitra area.

Israel, which is still technically at war with Syria, seized 1,200 square kilometres (460 square miles) of the Golan Heights during the 1967 Six-Day War and later annexed it in a move never recognised by the international community.

Around 510 square kilometres of the plateau remains under Syrian control.

Since the Syrian conflict erupted in 2011, the plateau has been tense, with a growing number of projectiles, mostly stray, hitting the Israeli side and prompting occasional armed responses.

Over the past year, Israel has reportedly carried out a series of raids on Syrian and Hezbollah targets, but has not officially acknowledged doing so.