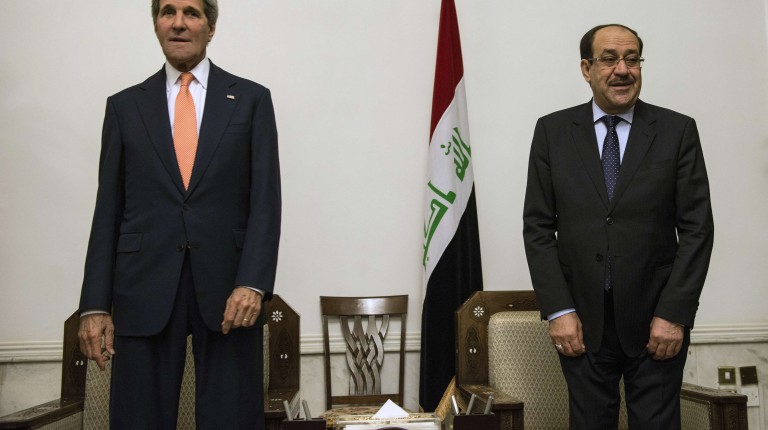 AFP – US Secretary of State John Kerry was in Baghdad Monday to push for stability, as Sunni militants overran a strategic Shi’a town and an airport, tightening their grip on north Iraq.

Flying in from Jordan on a visit which the State Department had sought to keep secret amid security concerns, Kerry met with Prime Minister Nuri Al-Maliki and was to hold talks with Iraqi leaders across the political and communal spectrum.

Kerry “will discuss US actions underway to assist Iraq as it confronts this threat from ISIL and urge Iraqi leaders to move forward as quickly as possible with its government formation process to forge a government,” State Department spokeswoman Jen Psaki said ahead of the meetings.

Iraqi security forces are struggling to hold their ground in the face of an insurgent onslaught that has seized major areas of five provinces, displaced hundreds of thousands of people and sparked fears that the country could be torn apart.

Maliki’s security spokesman said Monday that “hundreds” of Iraqi soldiers have been killed since the insurgents launched their offensive on 9 June.

The announcement on television by Lieutenant General Qassem Atta is the most specific information provided so far by the government on losses sustained by the security forces.

The militants, led by the jihadist Islamic State of Iraq and the Levant (ISIL), consolidated their control of the north of the country by capturing the Shi’a-majority town of Tal Afar and its airport, a local official and witnesses said.

“The town of Tal Afar and the airport… are completely under the control of the militants,” the official said on condition of anonymity.

Witnesses said security forces had departed the town after days of heavy fighting, and confirmed that militants were in control.

Atta said that security forces were still fighting in the Tal Afar area, but added that: “Even if we withdrew from Tal Afar or any other area, this does not mean that it is a defeat.”

The town, which is located along a strategic corridor to Syria, had been the largest in the northern province of Nineveh not to fall to militants.

The latest advance came after insurgents at the weekend swept into the towns of Rawa and Ana in Anbar province, west of Baghdad, after taking the Al-Qaim border crossing with Syria.

The government said its forces made a “tactical” withdrawal from the towns, control of which allows the militants to widen a strategic route to neighbouring Syria where they also hold swathes of countryside along the Euphrates river valley.

As Kerry began his visit, 69 detainees were killed in an attack by militants on a convoy carrying them near the town of Hashimiyah, in Babil province.

One policeman and eight gunmen were also killed in clashes that erupted during the attack in the Hashimiyah area of Babil province, according to a police captain and a doctor. It was not immediately clear how the detainees died.

ISIL aims to create an Islamic state incorporating both Iraq and Syria, where the group has become a major force in the rebellion against President Bashar Al-Assad.

Washington wants Arab states to bring pressure on Iraq’s leaders to speed up government formation, which has made little headway since April elections, and has tried to convince them ISIL poses as much of a threat to them as to Iraq.

Washington’s top diplomat warned all countries, particularly in the Gulf, that “there is no safety margin whatsoever in funding a group like ISIL”.

The group, which has been at the forefront of the insurgent offensive, has commandeered an enormous quantity of cash and resources as a result of the advance, bolstering coffers that were already the envy of militant groups around the world.

US leaders have stopped short of calling for Maliki to step down, but there is little doubt that they feel he has squandered the opportunity to rebuild Iraq since US troops withdrew in 2011.

“The United States would like to see the Iraqi people find leadership that is prepared to represent all of the people of Iraq,” Kerry told reporters in Cairo on Sunday.

He noted that minority Kurds and Sunni Arabs, and even some within Maliki’s own Shi’a community, had voiced dissatisfaction with the premier’s leadership, and said the government had to “rise above sectarian motivations”.

The Iraqi government has “to be inclusive and share power in a way that will maximise the ability of Iraq to focus on the real danger at this moment from an external source, which is ISIL,” Kerry insisted.

A top US official who has been on the ground in Iraq told reporters that there was “a lot of anxiety and a lot of looking to the US for help”.

Obama has offered to send up to 300 military advisers to Iraq, but has so far not backed air strikes as requested by Baghdad.