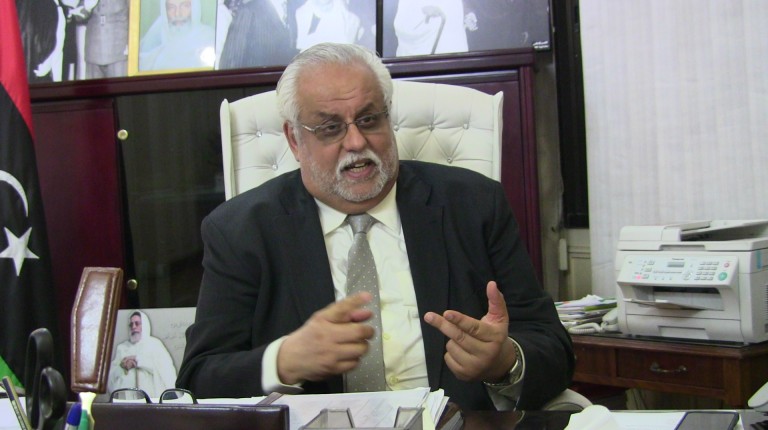 Given the recent unrest in Libya, fears have surfaced over the potential spillover effect across the border into Egypt. Daily News Egypt sat down with Mohammed Fayez Jibril, the Libyan Ambassador to Cairo to discuss recent events and relations with Egypt. The ambassador said the current situation in Libya is “simple”, except for the difficult situation in the Sahel. He added that all political parties must prioritise the interests of the nation and state-building in order for citizens’ interests to be realised, instead of focusing on fighting and carrying weapons.

First, what is your opinion on the elections that were conducted in Libya?

It must be known far and wide that Libya will not turn into a haven for extremist organisations or countries that are sources of fanaticism. We will not return to pre- 17 February;  to the autocratic fascism that led to instability in neighbouring countries and financed rebel movements, nor will be become a country beholden to a fascist group.

Libyans ​​have no choice but to execute the road map announced by the National Transitional Council (NTC) in 2011 in order to establish a civil state. All political parties must create the conditions necessary to conduct elections on 25 June in order to conclude the political process.

But some have criticised the roadmap.

This roadmap was voted on in 2011, and Libyans have come a long way despite criticism of the plan. Continuing implementation of the roadmap through these elections will guarantee a peaceful transition of power.

What about the fears that Libya has become a haven for Takfiri groups and a refuge for extremists?

Libyan society must eradicate these groups and I hope that this process will be a source of prestige and dignity for the nation.

The issue is not complicated: there are no ethnic, sectarian, or ideological disputes, [there is] only a lack of experience among the various political forces in conducting dialogue.

Libya suffers from fighting between the forces of the National Army, loyal to the retired Major General Khalifa Haftar, and the rebel brigades in East Benghazi.

Political currents in Libya suffer from “political poverty” thanks to Gaddafi’s 40-year rule.

Do you mean to say that the performance of the General National Congress (GNC) was not satisfactory?

Libyans hoped to see better political performance and for their country to become a safe place. The modest performance of the GNC was reflected by the government’s performance, as well as the unfairness of individuals and partners bearing responsibility.

But some feel that the GNC should not be the only body held responsible.

Libyan political forces raised the [needs] of political parties over those of the nation, and the absence of a constitution contributed to further fragmentation and splintering among political forces.

There was no constitution, but there was an election law. That was a political flaw.

The GNC was inundated with orders and legislation from the ruling power, and it would have been preferable to draft a constitution first and later formulate the election laws.

A lack of experience is what led to the current situation in Libya. This stage is short and Libyans must seek to build their state through dialogue and put an end to the fighting.

Political elites in Libya scrambled to search for legitimacy for their rule instead of educating people about the requirements of this phase.

Will armed groups manage to resolve the matter in their favour?

An armed group in Libya cannot resolve the issue itself, as this is a matter that pertains to all Libyans, who aspire to a strong democratic state.

The increase in violence has led to arms proliferation among the battalions that participated in the 17 February Revolution to topple Gaddafi, therefore weakening the prestige of the state.

The government employs several battalions to maintain security and protect public utilities. The continued weakening of state prestige means that these battalions must be incorporated under the jurisdiction of the Libyan army which is subject to the state.

There are parties that benefit from a continued need for these battalions to protect state facilities, and we must move in the direction of disarming the militias and battalions in order to strengthen the pillars of the state.

Is the retired Major General Khalifa Haftar able to exert his influence on Libyan lands?

I don’t think so, because the matter pertains to the Libyan people alone. It has been said that Haftar failed Parliament and is “all talk”.

But are there assurances from Libyan forces that Egyptian support exists for Major General Haftar?

Egypt does not interfere in the internal affairs of Libya, but the nation is understandably interested as a neighbour.

And are the Libyan people a party in the political equation now?

The Libyan people have the right to ask the international community to assist them with building the nation if they wish, and will not allow anyone to interfere in their affairs unasked.

And what about fears regarding Qatari support for some parties?

Qatar continues to be a bogeyman for us, but my country will not forget the people who helped us carry out the 17 February revolution. However, we also will not allow any state to interfere in our affairs.

But some Arab Gulf countries closed their embassies in your country, which may increase pressure on politicians.

I had hoped that neighbouring countries would not close their embassies at this point in time, but this is a strong message to all parties and we all must take note.

Some demand putting Libya under an international mandate in accordance with Section VII of the UN Charter to eliminate armed groups.

All decisions pertaining to the foreign mandate on Libya were [made] by the will of the masses. The intervention of the international community during the 17 February revolution was to support the Libyans to oust Gaddafi from power.

NATO did not intervene on its own to support the Libyan people’s revolution against their dictator.

Chapter VII of the Charter of the United Nations revolves around what the UN’s role is in cases in which peace is threatened and the state takes acts of aggression against civilians.

How do you see the situation in the east of Libya in Benghazi?

Acts of violence in eastern Libya, and fighting between pro-Heftar battalions and GNC supporters, will affect the work of foreign companies and their projects.

The East has a sense of injustice over the situation that prevailed throughout the 40 years of dictator rule, especially as there is oil in the East yet, the West is the more developed and organised part of the country. There are no calls for Eastern secession from Libya…There must be development of the region, which in the end will benefit the state by developing its various territories.

Libyans must be patient and work to transition from the current situation according to the roadmap declared by the TNC in 2011.

Does the international community have a role in Libya’s democratic transition?

The international community needs to assist us in building the state, whether through security assistance and training forces, or investments and helping build infrastructure.

There are some battalions Gaddafi loyalists are still working to undermine the Libyan revolution– this is one of the causes of violence.

Gaddafi dismantled the state. There was no military institution. During the Gaddafi period there were 35,000 officers and 10,000 soldiers and they were just dividing the spoils and wealth of Libyans.

What about the political Islam currents in your country?

Most of the political Islam currents in Libya are expatriates and do not belong to Libyan traditions and the Islam we are accustomed to: the Malaki school of Sufism. This current has played a major role, and the Muslim Brotherhood and the Salafists only recently entered onto the scene.

Those carrying weapons today cannot be excluded from political life. Many of them were in prison and are part of the revolution.

How do you see economic relations between Egypt and Libya?

The conditions the two countries are currently experiencing delayed the economic forum we were looking to hold, but after the completion of the Egyptian presidential election and the Libyan parliamentary elections there will be a push to increase cooperation. It is up to the two governments to achieve the aspirations of their peoples for concrete projects.

The Libyan investments in Egypt are around $12bn and trade between the two countries is $2bn.

Are there specific projects you are targeting during the coming period?

The internal situation in Libya is slowing down preparations for the economic forum and it is best for the governments to stabilise before moving forward on it, and they are on the path to achieving this now.

The Forum aims to launch a project for the cities of El Alamein and Tobruk to serve as a point of transit between the two countries and the largest projects in the southern Mediterranean region. The area has a historical value and has remained neglected for decades.

The victorious countries in World War II should be helping the two countries in developing the area rather than just visiting the graves of those who died in the war.

The region holds great promise for development. The area extends for more than 650 km between the two cities and more than 200 km into the desert.

We hope to establish tourist areas including hotels, resorts, and marinas to service yachts in the Mediterranean Sea. We also hope to set up agricultural and population centres.

Is the reason for development in the region only to tighten control over the borders?

No. The region’s value is big, whether in terms of development or for security. First international investments will be attracted in tourism and agriculture and alternative energy, and housing, creating job opportunities and resettling some 18 million people.

In terms of security, the region will help fight terrorism, illegal migration through Libya and Europe, and arms trade.

We proposed the project to previous Egyptian and Libyan officials and we will propose it again, and we hope to achieve cooperation on development between the two countries.

It us up to us to achieve our dreams on the ground. The region is strategically and developmentally important and it has historical importance as well.

There is a serious danger in not developing the area due to the spread of terrorists moving through it, along with arms trafficking and illegal immigration.

What about the Egyptian workers in your country and their exposure to violence?

Egyptian labour is flowing to Libya despite all these conditions and this labor will not stop. There are 1.6 million Egyptian workers in Libya and the embassy is issuing 300-350 visas every day.  22 visas were issued last year for Egyptian workers and the majority of Egyptian workers enter Libyan territory illegally. We are working to adjust their statuses. There are 200,000 workers each year crossing the border illegally.

Does this represent a danger for the country?

This affects Libya…the country will not be a starting point for illegal migration, which has negative effects on Libyan society and internationally from the spread of crimes among immigrants.

What about the Egyptian workers exposed to violence?

Egyptian media and the press look for exciting stories. Libya is a country that does not put restrictions– like neighbouring countries do– on Egyptian workers in terms of capping their money transfers, educating their children, or being treated in governmental hospitals.

The embassy has also reduced the period it takes to get a visa from 15 days to eight days.