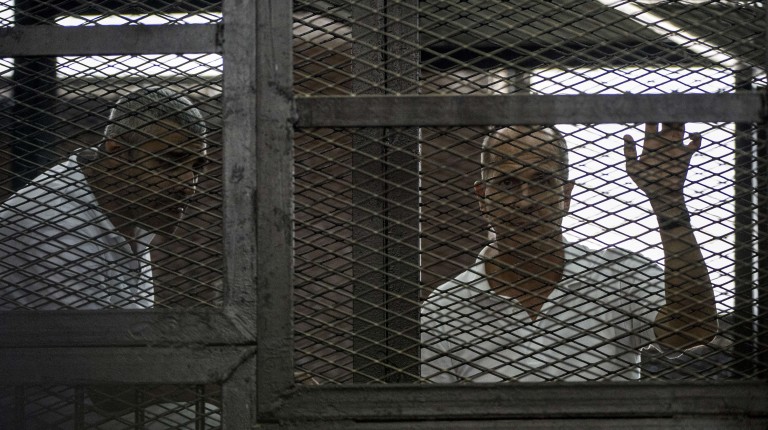 Local and international rights groups were quick to condemn Monday’s “politically orchestrated” Al-Jazeera trial, calling the verdict “disturbing sign for the future of the Egyptian press” and demanding the immediate release of the sentenced defendants.

Human Rights Watch (HRW) released a statement Monday noting that prosecution in the case “failed to present any credible evidence of criminal wrongdoing,” and instead chose to use the case as “the latest step in Egypt’s unrelenting assault on free expression”.

“Sentencing three professional journalists to years in prison on the basis of zero evidence of wrongdoing shows how Egypt’s judges have been caught up in the anti-Muslim Brotherhood hysteria fostered by President Al-Sisi,” said Joe Stork, deputy Middle East director at HRW.

The HRW statement called the trial a “miscarriage of justice based on zero evidence”.

The United Nations High Commissioner for Human Rights Navi Pillay, as well as the United Nations Secretary General Ban Ki-moon, condemned both the trial and the apparent politicising of the judiciary.

“Harassment, detention and prosecution of national and international journalists, including bloggers, as well as violent attacks by unidentified assailants, have become commonplace,” Pillay said.

“It is not a crime to criticise the authorities, or to interview people who hold unpopular views.  Journalists and civil society members should not be arrested, prosecuted, beaten up or sacked for reporting on sensitive issues. They should not be shot for trying to report or film things we, the public, have a right to know are happening,” Pillay said, adding that “[Media employees] should be protected not persecuted”.

A statement released by the spokesman for the UN Secretary General said: “[Ban Ki-moon] is deeply concerned by recent court decisions in Egypt, particularly the confirmation of death sentences for 183 people and the sentencing of journalists, including from Al Jazeera today, to lengthy jail terms.”

“Proceedings that clearly appear not to meet basic fair trial standards, particularly those resulting in the imposition of the death penalty, are likely to undermine prospects for long-term stability,” the statement added.

Both Pillay and Ban Ki-moon mentioned “that participation in peaceful protests or criticism of the government should not be grounds for detention or prosecution”.

Reporters Without Borders (RSF) offered some of the harshest criticism, noting that the trial was a “a sign of the Egyptian regime’s increasingly totalitarian nature,” and calling the verdict “politically orchestrated”.

“Not content with criminalising all political opposition, the Egyptian authorities are pursuing a policy of gagging news media that try to offer a different take on reality from the government’s,” Reporters Without Borders secretary-general Christophe Deloire said. “We point out that such arrests and arbitrary convictions violate the provisions of the new constitution, especially Article 71.”

Article 71 states: “It is prohibited to censor, confiscate, suspend or shut down Egyptian newspapers and media outlets in any way… No freedom restricting penalty shall be imposed for publication or publicity crimes.”

The Committee to Protect Journalists also released a statement in opposition to the verdicts: “These convictions are shocking, and an extremely disturbing sign for the future of the Egyptian press,” said Sherif Mansour, CPJ’S Middle East and North Africa Program Coordinator.  “Authorities must release the journalists immediately and overturn the verdict on appeal.” The statement noted that 14 journalists are currently behind bars in Egypt, while 65 have been detained since Mohamed Morsi’s 3 July ouster.

Also critical of the ruling, the PEN American Center stated: “The conviction, drawing on a trial devoid of any credible evidence against the accused, demonstrates a blatant disregard for the universally guaranteed right to free expression.”

On Tuesday, nine Egyptian rights groups released a joint statement condemning the court’s seeming disavowal of Article 71 of the Constitution as well as international human rights obligations, “in particular Article 19 of the International Covenant on Civil and Political Rights, which banned the restriction of freedom of expression”.

“All [the defendants] have done is practice the profession of journalism,” the statement said, “which is protected in the Egyptian Constitution”.

The statement concludes by urging the Supreme Judicial Council to address the “anarchic” court rulings issued recently, referencing a death sentence given to 183 alleged members of the Muslim Brotherhood last week.

Among the local signatories are the Association for Freedom of Thought and Expression, the Arab Network for Human Rights Information, the Egyptian Initiative for Personal Rights, and the Nadeem Centre for Rehabilitation of Victims of Violence and Torture.