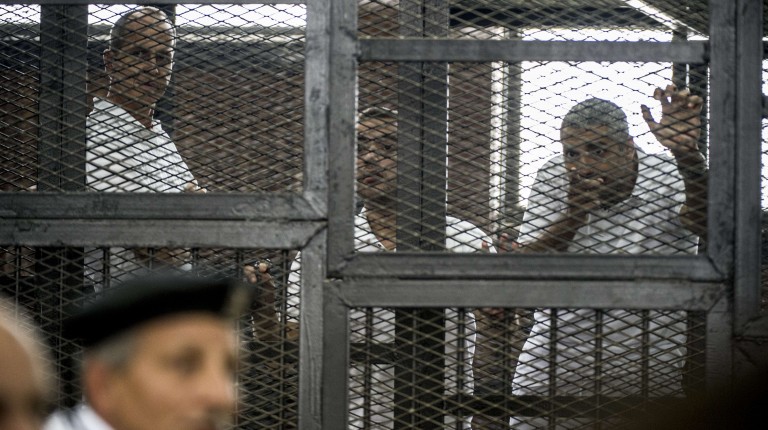 Commenting on a recent court verdict sending three Al Jazeera journalists and 15 other defendants to prison for a period ranging from 3 to 10 years, Al-Sisi stressed that the Egyptian judiciary is independent.

“During my first meeting with him, I told the justice minister I will not interfere in judicial affairs,” Al-Sisi said during a graduation ceremony held at the Military Academy. “If we want an institutional state, we must respect judicial rulings and refrain from commenting on them.”

Greste, an Australian, is one of four foreign defendants named in the case. Fahmy, recognised by the court only as an Egyptian, also holds Canadian citizenship.

The other foreigners, tried in absentia, are Britons Sue Turton and Dominic Kane, who have previously worked for Al Jazeera in Cairo, but were not in the country at the time of arrest. Dutch journalist Rena Netjes is also a defendant, but has never worked for Al-Jazeera, and was allowed to leave Egypt following discussions between the Dutch embassy and the foreign ministry.

The Egyptian Ministry of Foreign Affairs strongly rejected the foreign statements commenting on the verdict.

“We strongly reject any foreign comment casting doubt on the independence of the judiciary or the justice of its verdicts,” read a foreign ministry statement released on Monday night. “Such interference in our internal affairs is rejected; it angers all Egyptians.”

The prison sentence has been widely condemned by several countries and international organisations. United States Secretary of State John Kerry described it as “chilling and draconian” while the White House called on the Egyptian authorities to pardon the sentenced defendants.

“The prosecution of journalists for reporting information that does not coincide with the Government of Egypt’s narrative flouts the most basic standards of media freedom and represents a blow to democratic progress in Egypt,” read the White House statement, released on Monday.

The White House stressed that Egyptians have demanded and are entitled to “fundamental freedoms”, adding that Monday’s court verdict goes against such demands. The US body urged Al-Sisi to protect freedom of expression and assembly in Egypt and guarantee the fairness of judicial trials, noting that such are Egypt’s “international obligations”.

Canadian Minister of State Lynne Yelich also condemned the verdict, describing the judicial process which resulted in the verdict as “inconsistent with Egypt’s democratic aspirations”. Yelich especially focused on Fahmy, who holds a dual nationality, saying that Canadian officials will continue to provide the imprisoned journalist with consular assistance.

British Foreign Secretary William Hague, who summoned Egyptian Ambassador to the United Kingdom Ashraf Elkholy shortly after the issuance of the sentence, said he is “appalled by the guilty verdicts handed down against Egyptian and international journalists in Egypt.”

In response to the 10 year sentence given to Dutch journalist Rena Netjes in absentia, The Netherlands’ Ministry of Foreign Affairs also summoned its Egyptian Ambassador, expressing its disappointment with the verdict.

Egyptian Foreign Minister Sameh Shoukry assigned Egyptian ambassadors to request “emergency meetings” with foreign ministry officials in the countries where they represent Egypt to “preemptively present the prosecution’s statement regarding the details of the case”. The foreign ministry added in a statement that this would be done to “put out the facts of the matter, away from the false information [circulating]”.

The ministry also commented on the summoning of some Egyptian ambassadors, saying it gives them the opportunity to “explain the truth”. The ambassadors were also assigned to stress the judiciary’s independence as well as the “guarantees to the freedom and independence of the media, safeguarded in the new constitution”.

The foreign ministry denied the existence of restrictions against foreign media in Egypt. It said there are over 1,200 accredited reporters in Egypt, representing over 290 foreign media organisations that “perform their job amid complete freedom, without any restrictions or persecution so long as they respect the rules and laws adopted”.

Dubbed the “Marriott Cell” by the prosecution and Egyptian media, Fahmy and Greste were arrested on the evening of 29 December at the Zamalek Marriott, where they were using two suites as a base of operation after Al Jazeera had faced repeated raids, arrests and confiscation of equipment.

Mohamed was arrested the same evening from his home in suburban Cairo.