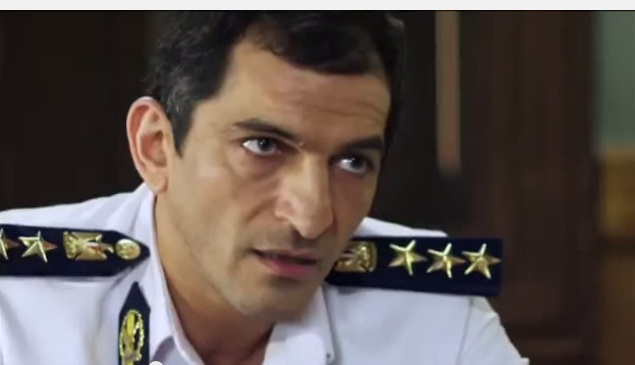 The posters line up Cairo’s main streets and bridges rolling the drums to start the annual race of Ramadan TV series, where production companies, satellite channels and actors compete for higher viewership. The TV series Ahl Iskendereya (The people of Alexandria), might be excluded from the race.

Al-Haya and Al-Mehwar, two private TV channels, banned the series Sunday, even after they aired promotions.

The series, which portrays the story of a corrupt state security police officer before the 25 January Revolution, was previously rejected from being aired on public TV channels.

The decision “practically prevents the series from being shown this year”, wrote Belal Fadl, the series’ screenwriter, in a statement issued Sunday. The censorship situation is worse than “what happened even during the time of Hosni Mubarak”, he said. The series was banned though a private entity instead of government censorship institutions, a move he labelled a “persuasive ban”.

Before a television series is scheduled to air, it must get the go ahead from the Egyptian directorate for censorship of artistic works. A preliminary approval of the script is required for the production to begin, then, upon providing the directorate with the produced work, the piece receives final approval.  Ahl Iskendereya passed the first round of approval and was scheduled to submit the completed episodes for review Monday, Fadl wrote.

Censorship institutions are “never inattentive”, he wrote, adding that he questioned “the nature of an institution that would make such a decision, days before the scheduled start”.

Fadl, who called on artists, writers and intellectuals for help, said he hopes the public can pressure the two private channels to reverse their decisions.

In an email, Fadl said he has “switched off” his phone since releasing the statement. “Tomorrow things will be clearer,” he wrote.

Regardless of the ban, Magda Khiralla, a screenwriter and a critic, said the series will be shown in one way or another. She expects that the controversy will increase the viewership.

“This series was produced by the state’s money— the public’s money and has all the required legal approvals,” Khiralla said. “This decision will remain a dark spot in the history.”

Ahl Iskendereya is one of at least 12 televisions series from this year’s Ramadan line-up that address political topics. That represents almost one third of the programming. Several screenwriters, including Fadl, were actively participating in the revolution.

The prime time television line up is a reflection of conversations from the Egyptian street.

“If a family sits together to have lunch or dinner, politics will always pop up in the conversation,” said Khiralla. “Politics cannot be separated from daily life. With Egypt’s current political situation, daily experiences like power cuts and rising prices lead to discussions about corruption and other political topics.”

Several of the seasons shows are tackling corruption, in particular.

The second part of Shari’ Abd El-Aziz, a series that borrows its name from a street in Cairo known for its cell phones and electronics market, depicts the relationship between political power and money.  After the success achieved by its first part, the series follows the story of one of the salespeople in the market who becomes a member of the National Democratic Party, the former ruling party in Egypt, pursuing his search of power after former members controlled his business with hidden deals and subtle authority.

In another series, Al Sayida Al-Oola (The First Lady), the pursuit of power leads a woman to push her husband to run for Egypt’s presidency. The couple desperately fight and follow their ambition despite obstacles.

Other series highlight the arms trade, Egyptian security and justice systems. Segn Al-Nesa (women prison), which is based on a true story, proposes a different experience of three women who suffered difficulties in their lives and ended up in prison. The prison experience changes their lives with the changing political context of the revolution.

It’s hard to say how the politically charged television line up will affect people’s perceptions about Egyptian society, Khiralla said.

“Anything to be said about them is just expectations,” she said. “The important part is how these topics are tackled – whether the work is of good quality or it’s just something to be shown.”