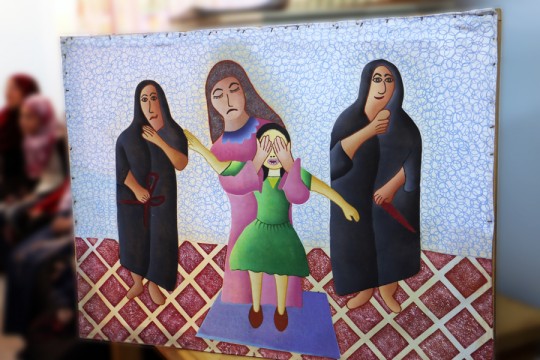 14 June marks National Anti-FGM Day in honour of 12-year-old Bodour Shaker, from Minya, who died on the same date in 2007 as a victim of this inhumane practice. In June 2013, 13-year-old Soheir El Batea from Daqahleya suffered the same fate. As heartbreaking as these two tragedies are, their untimely deaths were not in vain: as a result of public mobilisation, the practice of female genital mutilation (FGM) was criminalised by law in 2008 and the first criminal case is currently under prosecution, respectively. FGM is a grave violation of human rights and one of the worst forms of discrimination against girls and women.

FGM has been a taboo for many years in Egypt. Its practice has been widely accepted due to conservative mindsets, particularly in rural areas, and poor socio-economic and public service conditions. While prevalence rates remain high namely among older women, response of younger girls and mothers of new generations to FGM Abandonment Campaigns is much higher.

Data from the Demographic and Health Survey suggest that some improvements occurred over the last two decades; in 2008 among women aged 15-17, the FGM/C prevalence rate was 74% compared to a prevalence of 95% among women aged 30-34. However, 72% of the practice is conducted by medical doctors, which continues to be a main concern.

The joint efforts of community activists, authorities, development agencies and media are gradually making a difference to phase out this traditional harmful practice.

Last February I met a group of women, men and girls in Fayoum that are actively advocating against the practice of FGM. A father and schoolteacher told us that when he understood that FGM has no religious basis but an inherited traditional habit, he decided not to inflict this pain on his daughter and to talk to his colleagues at school against it. Talking to a similar group in Aswan a month later, a mother spoke openly about her painful personal experience and her reluctance to subject her daughters to the same, in spite of the fierce opposition of her mother-in-law. Another woman turned community activist explained that until recently she was often afraid and had to meet families in hiding to carry on her advocacy message, whereas presently she is invited by families to speak at their house. As evidenced by these testimonies, once people change their perceptions on FGM, they become staunch advocates against this harmful practice.

But Egypt is a vast country and the challenge remains significant: changing harmful customs is a long-term goal that entails a generation to make it happen in a sustained manner. Promoting women’s rights and overcoming discriminatory practices against women and girls is a developmental issue that concerns all Egyptians, not just the victims of abuse. Unless it is addressed as such, Egyptian society will not progress as a whole.

Ignacio Artaza is Country Director of the United Nations Development Programme in Egypt.