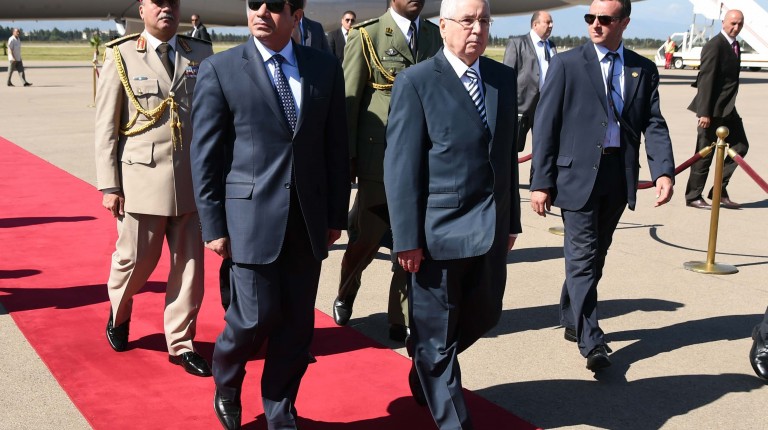 Al-Sisi is set to discuss regional and international developments with Algerian counterpart Abdelaziz Bouteflika, state-run MENA reported. This is Al-Sisi’s first international visit since his inauguration on 8 June.

After Algeria, Al-Sisi will head to Equatorial Guinean capital Malabo for the 23rd African Union (AU) Summit. He is expected to address the summit, as is tradition for a newly elected president of a member state.

Egypt’s Foreign Minister Sameh Shoukry left for Malabo Sunday to attend the foreign ministers’ meeting, held in preparation for the Heads of State Summit. This is Egypt’s first activity in the AU since the lifting of an 11 month suspension.

The AU was quick to suspend Egypt from all activities just two days after the ouster of former President and Muslim Brotherhood politician Mohamed Morsi in July 2013.

During Fahmy’s January visit, Lamamra said “Algeria did not ask for the isolation or exclusion of any member of the AU.” He described freezing Egypt’s activities as “precautionary measure” to encourage Egypt to return to constitutional order.

Fahmy commended the Algerian stance concerning the Egyptian situation. “Egypt is grateful that Algeria did not interfere in their internal politics,” he said.

When Egypt was suspended, the AU’s Peace and Security Council said the way Morsi was removed from power “falls under the definition of an unconstitutional change of government.” It added that the suspension would last until constitutional order is restored in the country.

Throughout the 11 months, Egypt rejected the AU’s suspension decision. Less than two weeks after Al-Sisi’s inauguration, Egypt was reinstated in the AU. On 17 June, Egypt’s Foreign Ministry said it “welcomed… the [unanimous] decision to return Egypt to its natural place within the Union and to resume its participation in the activities of the African Union.”