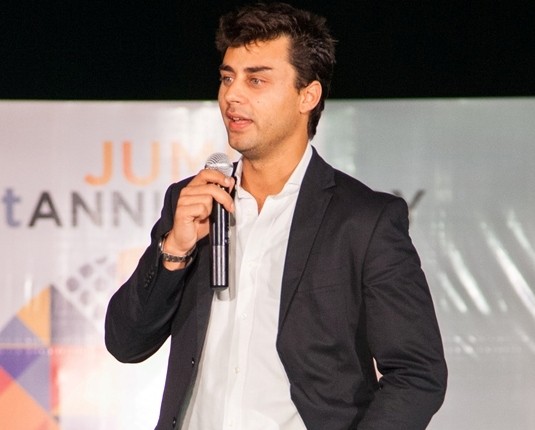 Less than two years after its launch in October 2012, Jumia Egypt has become one of the strongest competitors in the Egyptian e-commerce market. The online shopping website expects its market to grow by 36% in 2016. The Daily News Egypt sat down with Jumia Egypt’s CEO Mattia Perroni to discuss Jumia’s latest projects, services and their progress and growth plans.

What are the latest products/services Jumia has been working on?

We just launched our new brand. It’s a fashion brand called Agu, and has been created in conjunction with an English designer . It’s a new brand that is available on Jumia because we produce it ourselves, but it’s a design from England and produced in Egypt.

So is there a factory that Jumia deals with to produce this fashion brand?

Yes, although it’s not our factory. We have three or four factories in Egypt that we work with, and actually it has been amazing to understand how the unit economics make sense in terms of production in Egypt. The one issue we face is in shoe production – I have never found a reliable, good producer of shoes. For all our other products, it’s quite convenient with regards to costs and quality to produce in Egypt, as well as in terms of the designing. We have excellent involvement of the producer and the factory in the process. For example, our designer comes up with a new style and a new collection, goes to the factory and discusses these designs with the factory which is pretty much involved. The creativity and the well of innovation that goes into fashion are amazing.

But what encouraged you to start in fashion and not anything else?

Is it a full collection?

Now it’s a full collection, but very basic. It is long dresses, t-shirts and polo-shirts, clothes for women and men. This is because it’s just the beginning. In the winter, we are looking to have a more expanded collection.

When was the new brand launched?

It was soft launched like two months ago but in the last 10 days, we started to put the brand out there and it’s becoming the focus of marketing in general.

Is Jumia targeting a specific market segment with the new brand?

What are the products that are most purchased online?

This is both very surprising and depends on the season. Obviously, for example, in April people start selling air-conditioners but these won’t be in demand in December, because you sell heaters. There is an effect of seasonality. That being said, when we look at the categories, it is definitely the electronics, mobiles and tablets which are the products generating the highest volume on the website. Right after that, with big surprise, fashion is exploding. This fashion boom is also because we were the first real online fashion shop.

Now things are also changing within fashion because within the last few months, we signed six of the 15 biggest international brands in Egypt. I can’t disclose the names unfortunately because we have a big press release coming up soon. They work season by season and that’s why they are not online yet, but they will be online in the season from September.

The most unexpected aspect of our fashion sales, and what I find very strange, is that about 68% of the purchases are generated by men. And the end it makes sense but it wasn’t expected. But now with these big brands coming, I definitely think that the attraction of women would be much higher, so I think things will change soon.

And what are the products purchased the least?

There are things that we don’t sell because we haven’t had sufficient demand, and there are things that don’t really have a big marketing potential in Egypt, compared to the other markets that we have in Africa. For example, Toys, Kids and Baby, as a category is a huge category in all other markets but not in Egypt, where it is not really taking off. We’re selling up to 70 items per day but compared to the other countries and the explosion it has online in Egypt it’s not really selling. I think that there are mixed reasons behind this. On one hand, we don’t really have the right assortment and we are not fully developed in this category. On the other hand, I think that it is also related to the fact that women shop online a bit less than men. At the end, when it comes to kids, I think 85% of the time the women are doing the shopping for their kids with fewer women than men into online shopping. I think that it is also a market dynamic.

How many orders are placed per day?

We are currently in the range of 2,000 items per day that get shipped. At the beginning of May 2013, our orders were around 200 orders per day.

What about the traffic you get on the website?

At the moment we have about a little bit less than 2 million visits per month. But this is a really interesting topic because basically you have a sort of a funnel where you have the visits and then you have the orders. Between this and that, there is a metric that is called the convergence rate, which identifies how many of the visitors actually made a purchase. This rate depends on multiple things such as: are we offering what people actually want?; do we having good prices?; is the overall experience of navigating the website good?; all of these factors reflect on this percentage. The increase of visits has been quite high, but the increase of the convergence rate compared to other countries has been amazing. Meaning that in Egypt, compared to other countries, people are more ready to purchase online once they are online than in other countries.

How much did the convergence rate grow though?

We can say that it grew by about five times, which represents there are parts of the Egyptian population who at least try online shopping.

Jumai’s payment methods are either through credit cards or through payment by cash on delivery. How often is each method used?

Something that is interesting is that when a customer orders cash on delivery the first time, he is more likely to buy with a credit card the second time, which is a good sign for us.  Not that it differs to us very much, because whether it is cash on delivery or credit cards, we collect the money in a very very close period of time.

Jumia previously stated that purchasers can come to the office and pick their products up; do you still offer that service?

No we stopped it because our market is out there, where we need to reach out to them. In Cairo it’s 60%, in Alexandria it is 20% and the rest is spread throughout the rest of Egypt. As little as 3% or 4% of the orders where by pick-up, so at the end it was a service that our customers were not appreciating as much. It was also not convenient enough, because people are shopping mainly from elsewhere. The reason why Jumia introduced that was mainly because we wanted people to see what we have, and to generate a bit of company awareness.

What’s the profit Jumia is aiming for by the end of 2014?

Amazon, which is one of the biggest e-commerce companies in the world closed last year with a 0.9% profit. So just to start with, this is a beautiful business but very hard to actually make profit out of it. When the biggest players make 0.9% and they are shipping like 4,000 orders every 10 minutes [you know you have strong competition].

What about your plans to increase your market share against your competitors?

I would love to be able to know all the market shares of each player in the market, but these figures are just not available. What I can say is that our growth is three to four times faster than our competitors in terms of what I can see from the data. Jumia has about 1.9m fan, on the JM page and 1.8m fan on the fashion page, which we launched about 18 months ago. The total number of unique fans is 2.6m in the two Facebook pages.

To be very frank, people keep asking me how big the market is, how the market share is and how the business is doing and all of that, but what I care about is to offer good products and let this company grow at double digit rates. Whatever the competition is doing at this point of time is not really my focus.

Jumia recently launched the shop-in-shop service. Tell us more about that.

Our slogan used to be shop smart, shop online. Now it is becoming shop smart shop online but also sell smart sell online. Basically we built this IT platform that we give to qualified sellers that have possible potential at Jumia. What we offer them is the opportunity to sell their products at zero cost, where you take pictures of your items and put them on Jumia. The requirements, however, are really strict and products must pass through quality controls. In case all the quality controls are passed then on that day you’ll be live on Jumia. This means that you have 2 million potential visitors per day and a market that is all across the country.

About the strict rules or the quality checks, can you explain that a little bit further?

I will discuss the strictest rules. So if you are a seller and you sell for one time fake time, you’re out. Whatever you are, you’re out of Jumia. For us, this is a killer issue. Imagine someone buys something from Jumia and it’s a fake product. The second is the packaging. If the packaging is not properly done, you get a first warning. The third is the return rate. If you’re a seller and you’re return rate is much higher than the others then there is no reason why you should be on Jumia.

Is there a specific return rate that is unacceptable?