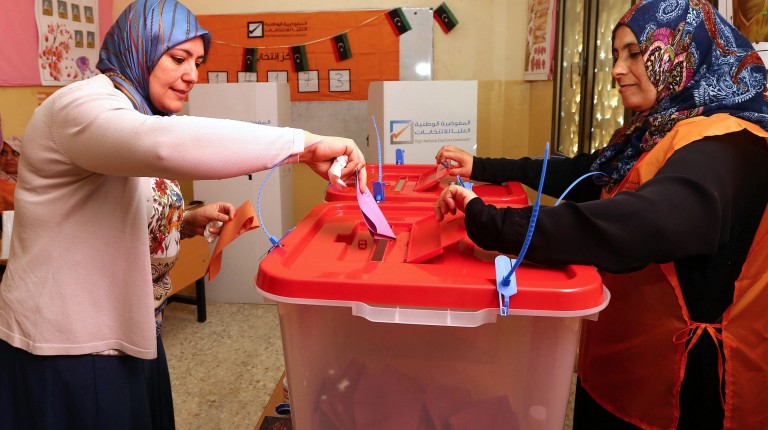 AFP – Libyans were voting Wednesday in a legislative election the authorities hope will end political turmoil and deadly violence that has gripped the country since the ouster of dictator Muammar Gaddafi.

Voters in Tripoli and Benghazi took advantage of a public holiday called for the election, trickling in to cast their ballots.

Security was tight around some polling stations in the capital, while totally absent at others.

In the past few weeks, Libya has been rocked by a crisis that saw two rival cabinets jostling for power amid a crippling showdown between Islamists and liberals, as violence raged in the east, where a rogue general is battling jihadists.

A patchwork of militias, including Islamic extremists, who helped to overthrow Gaddafi in the NATO-backed uprising of 2011 have been blamed for violence that has continued unabated since the end of the revolt.

“These are the last chance elections. We are placing much hope in the future parliament to restore the security and stability of our country,” said Amr Baiou, 32, as he emerged from a voting centre in a residential Tripoli neighbourhood.

The heavily armed rebels who ousted and killed Gaddafi have carved out their own fiefdoms in the deeply tribal country, some even seizing oil terminals and crippling crude exports from a sector key to government revenues.

The General National Congress (GNC), or parliament, which has served as Libya’s highest political authority since the 2011 revolt, was elected in July 2012, in the country’s first ever free polls.

But it has been mired in controversy and accused of hogging power, with successive governments complaining its role as both executive and legislative authority has tied their hands in taming militias.

The crisis came to a head in February when the assembly, whose term had been due to expire, decided to prolong its mandate until December.

That sparked street protests and forced lawmakers to announce the election.

Almost 3.5 million Libyans are eligible to vote but only 1.5 million have registered, a far cry from the more than 2.7 million who registered two years ago.

Voters are choosing from among 1,628 candidates, with 32 seats in the 200-strong GNC reserved for women and would-be MPs banned from belonging to any political party.

Polling ends at 8:00 pm (1800 GMT), and final results are expected in “several days”, according to electoral officials.

The UN Security Council has expressed hopes that the vote can be a stepping stone out of the chaos.

“These elections are an important step in Libya’s transition towards stable democratic governance,” it said this week.

For analyst Salem Soltan, none of the candidates standing in the elections “carry the political or social weight” needed in the assembly.

The new parliament risks “being run by shadow MPs, who will act according to instructions from warlords and militias,” he said.

But some of those taking part in Wednesday’s poll disagreed.

“We are voting so as not to repeat the mistakes of the past,” said Salah Al-Thabet.

“We voted in the first elections just to vote. This time I have really researched the candidates, and I voted for the right people,” added the 62-year-old pensioner, after casting his ballot in central Tripoli.

There are concerns that violence will mar polling day, particularly in the unrest-hit east, scene of a deadly 2012 attack by jihadists on the US consulate in Benghazi.

“Generally, we are optimistic, but there is a risk that the vote will be disrupted in some polling stations, namely in Benghazi and Derna,” both Islamist strongholds, an electoral official told AFP.

Last week, the government instructed the interior ministry and the armed forces to come up with a security plan for the vote.

The task is not expected to be easy.

Authorities have been struggling to build a strong army and police force and now face defections from members of the security forces who have joined the ranks of rogue general Khalifa Haftar who is battling Islamists in Benghazi.

Haftar, accused by authorities of trying to mount a coup, said he would observe a truce during the vote, but the Islamists did not divulge their intentions.