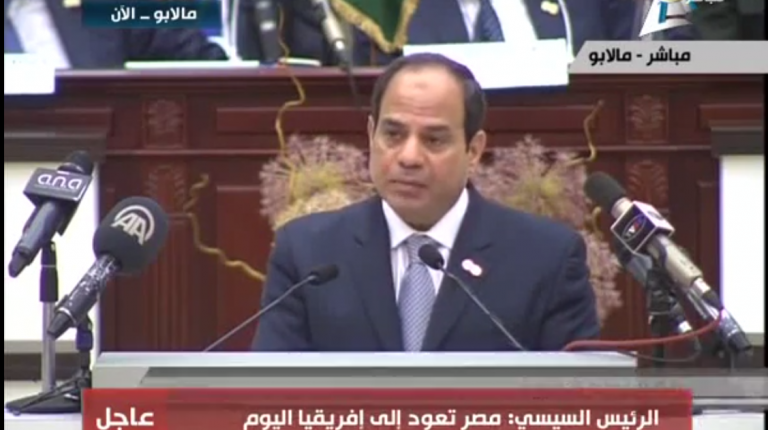 President Abdel Fattah Al-Sisi thanked the African Union for its decision to reinstate Egypt in its Peace and Security Council, almost one year after it was suspended.

“The 30 June Revolution has combined the efforts of all Egyptians to spare the country from civil war,” said the Egyptian president, who listed African leaders including former Egyptian president Gamal Abdel Nasser and the late South African president and leader Nelson Mandela, calling them part of a “long list of leaders of great leaders” of the African continent, on a vision “based on the values of justice and respect for human dignity.”

Al-Sisi also highlighted domestic developments in Egypt including the adoption of a new constitution, saying the purpose of 30 June “was to represent the aspirations of our people toward common development, democracy, justice, and human dignity.”

“I trust all African brothers have come to realise that 30 June was a full-fledged popular revolution in which the armed forces sided with the will of the people, and not vice versa,” he added.

The Egyptian president also expressed his gratitude to the African Union for deploying an elections observer mission during presidential elections earlier this month.

Al-Sisi arrived in the Equatorial Guinean capital of Malabo Thursday morning after a visit to Algeria, and met with African leaders before the official start of the 23rd African Union Summit.

Egypt’s participation in the AU summit represents its first activity in the AU since the Peace and Security Council (PSC) lifted its suspension, which was in place since the ouster of former president Mohamed Morsi last July. The council deemed the change of government as “unconstitutional” and in violation of the union’s charter.