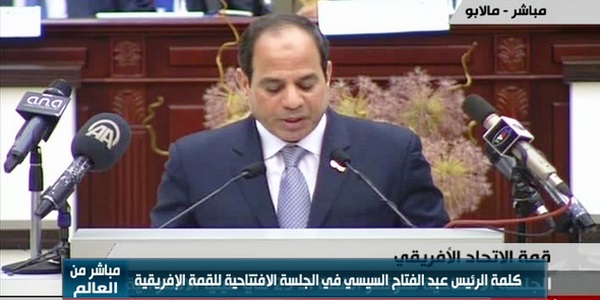 President Abdel Fattah Al-Sisi will fly to Khartoum on Friday for a meeting with Sudanese President Omar Al-Bashir to discuss bilateral relations and the Sudanese president’s health.

According to state-owned MENA, Al-Sisi will arrive in Khartoum Friday afternoon for the first talks between the recently elected Al-Sisi and Al-Bashir, who recently underwent surgery.

Al-Sisi will be traveling to Khartoum from Equatorial Guinea, where he gave a speech yesterday after Egypt was welcomed back into the African Union.

The pair will discuss bilateral ties between the two African nations as the two leaders seek to expand and strengthen ties.

During his visit to Equatorial Guinea, Al-Sisi thanked the African Union for its decision to reinstate Egypt after almost a yearlong suspension.

Al-Sisi also highlighted domestic developments in Egypt including the adoption of a new constitution, saying the purpose of 30 June “was to represent the aspirations of our people toward common development, democracy, justice, and human dignity.”

“I trust all African brothers have come to realise that 30 June was a full-fledged popular revolution in which the armed forces sided with the will of the people, and not vice versa,” he added.