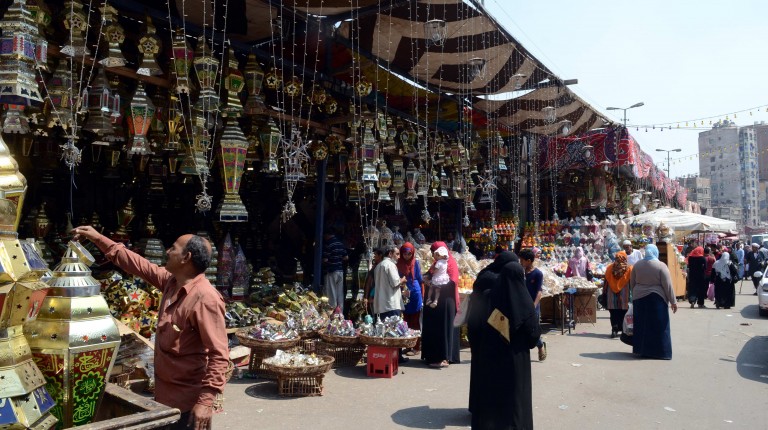 Lantern prices rose by approximately 20% this Ramadan over last year thanks to the high price of the dollar according to Ihab Issa, a lantern merchant. Issa, working in the Bab Al-Shareya neighbourhood, home to many workshops that produce Egyptian lanterns by hand, attributes the increase this year to the price of tin.

Bab El Shareya is also well-known for its coppersmiths that produce brass handicrafts, the most important of which are Ramadan lanterns which distinguishes this neighbourhood from others.

The price of lanterns ranges between EGP 50-600 depending on the size and the materials used, said Issa.

He added that bigger lanterns priced over EGP 300 are purchased by large department stores and hotels and are often placed in entranceways to attract patrons.

Individuals and families typically purchase lanterns priced between EGP 50-180, the variety that is also higher in demand instead of larger models.

Issa explained that shops in central Cairo, especially Old Cairo, prepare for the season at least 4 months in advance by buying raw materials and communicating with buyers from hotels and large stores.

The troubled political situation in Egypt over the past three years has led to fewer individuals entering into the industry.

“Sales do not exceed more than EGP 2000 per day now, but in 2010, they reached EGP 6000,” said Issa, “We hope that the situation changes this year with the advent of political stability.”

Hotels that plan to set up Ramadan tents on their premises in Cairo or in desert areas are among the leading Ramadan lantern buyers added coppersmith Saleh Mahmoud.

Mahmoud, in his sixties, told Daily News Egypt that he inherited his profession in the lantern industry from his father, and that he supports a family of six.

“The situation is not like it was before. We sell Egyptian lanterns at good prices but the majority of Egyptians are unable to afford them and save money to buy food and other commodities instead,” he explained.

Saleh attributed the price increase to a rise in raw material, rent, and wage costs.

According to Saleh, sales for lanterns made in Egypt have dropped by more than 70% since the nineties. Saleh attributes these to an infiltration of Chinese lanterns into the market alongside the Egyptian lanterns, which are masterpieces.

At the end of the coppersmiths’ street, close to Moez El-Din Allah El-Fatimy, a young man in his twenties sits in a shop. Amro Mahmoud says that “Chinese lanterns were introduced alongside Egyptian ones and more people buy Chinese due to the low price and the presence of battery-powered lanterns that children love.”

According to Amro, Chinese lanterns start at EGP 5 for the smaller variety. They can go up to EGP 100 for the medium-sized lanterns often purchased by families to be placed in the reception to welcome guests.

Children are especially attracted to battery-powered lanterns that play Ramadan songs and have multi-coloured electric bulbs.

In addition to electric bulbs, Chinese lanterns also boast pictures of cartoon characters loved by children or Egyptian politicians like President Abdel Fattah Al-Sisi. Others have wings that move on the ground according to Amro, who added that prices have risen by approximately 20%.

In Abdeen, close to Tahrir Square in downtown Cairo, shopkeepers have made large decorations announcing the sale of Ramadan lanterns said Mostafa Al-Dawi, a lantern vendor in the area. He added that sales have decreased from last year by more than 20% due to the difficult economic conditions experienced by Egypt and a sharp decline in income.

According to Dawi, the week before Ramadan accounts for the highest level of sales, which drop by 50% for the second week of Ramadan and more than 90% by the third. This is partially due to Egyptian families’ occupations with preparing for the holiday, and they allot a large portion of spending to purchase clothing, sweets, and antiquities.

These goods face sharp competition from Chinese products according to Mohammed Al-Qattan, Chairman of the Chamber of Goods and Tourist Antiquities.

“There is no interest in these industries and they are on the path to extinction,” he said.

Al-Qattan requested that the state support Egyptian handicraft industries in order to prevent increasing unemployment and to keep hard currency in Egypt. He added that these products are a part of Egypt’s heritage which means that intellectual property rights allow Egypt to defend these products and claim compensation from countries that manufacture and sell similar products in the market.

Egypt loses more than $1.5bn due to a lack of interest in these industries, said Al-Qattan.