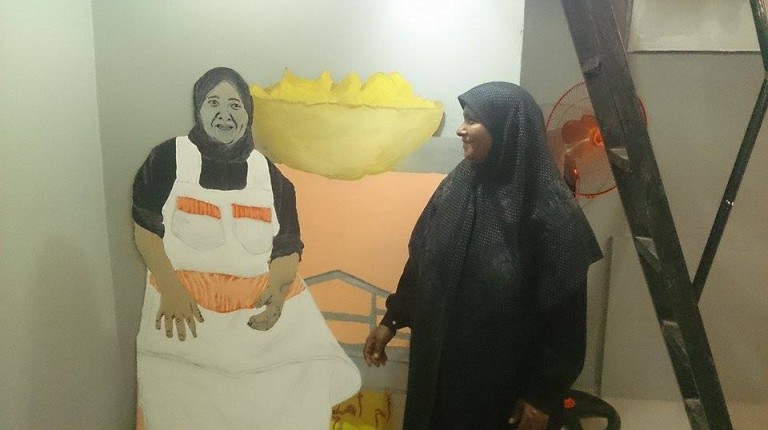 A graffiti artist and a blogger who rose to fame during the 25 January Revolution opened a new gallery this week that aims to celebrate and propagate street art in all its forms, including graffiti, photography, and graphic design.

Street art in Egypt dates back to the Pharaohs, who wrote and drew on their temple walls.

“Modern graffiti has been around since president Gamal Abdel Nasser,” Salem said, but it became more prominent after the revolution, as the revolutionaries used graffiti to communicate their thoughts with the public. They did not need a TV appearance or a public platform to convey their political views; graffiti got the message across.

“We want to create a positive impact with street art,”  El-Moshir said.

El-Moshir and Salem celebrated the gallery’s opening with the “Kafahteya Street Vendors Project” (Kafaheteya means “those who struggle” in Arabic).  El-Moshir and Amira Al-Asmar, artist and revolutionary, created the art exhibit, which included murals, made with up to 28 layers of spray paint, . Each scene portrays a street vendor, such as Om Amira, a popular potato seller in Bab El Louq, and Waleed, a little boy who breathes fire for a living near Nadwa Café. The gallery also includes photographs and a short film about the vendors and the making of the project.

The Kafahteya project aims to use graffiti, graphic design and photography as intellectual and practical tools to communicate and support street vendors, El-Moshir said. The team of artists used graffiti on the walls next to the vendors, effectively advertising them. They also painted the trees around the place using bright colours to attract shoppers. By creating logos for the street vendors and making their business look like famous brands, the artists hope the exhibition will boost their sales.

The project allows street artists to communicate freely with the public, Salem said, without boundaries or limitations set by the media or any other organisation.

Heytan has been two years in the making.

When Salem and Mohamed started out in 2012, art lovers and revolutionaries rallied to the cause. They raised funds from a number of supporters, including Hisham ElKhazindar, co-founder and managing director of Citadel Capital, and activist Rawaa Badrawy.  As the fervour of Egypt’s 2011 revolution wore off, however, supporters started losing their enthusiasm for the Heytan, too, pushing project close to abortion several times.

The Ismailia Company provided a  work space in a rent-free apartment in Downtown Cairo for the team. But, problems continued to pile up. The artists underestimated the amount of money required to turn the work space into a gallery and the difficulty of fundraising in tough economic times, according to Salem. Some of the men working on the apartment were attacked, resulting in some broken bones.  A disgruntled doorman robbed and sabotaged the place, Salem reported, and the contractor’s brother was murdered. The partners began to think that the project was “cursed”.

Monday, standing in the middle of the finished gallery, Salem smiled.

“I cannot believe it’s done,” he said. “This is such a relief”

Kafahteya will be on display at Heytan, 17 Gawad Hosny Street, Downtown, Cairo, Sunday and Monday from 6pm to 10pm.