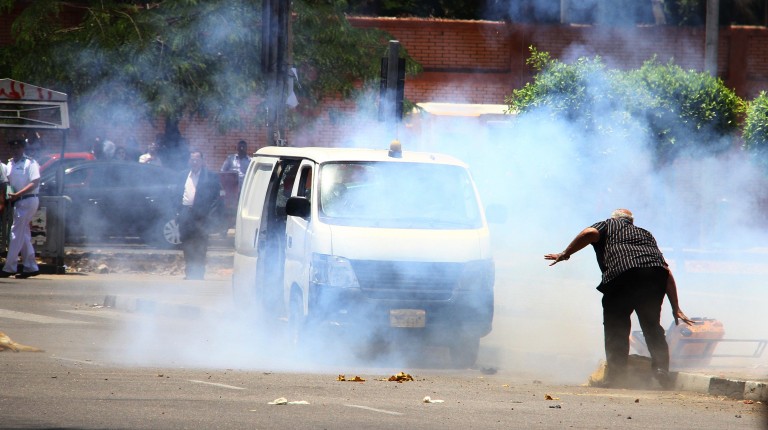 Political parties have expressed their condemnation of a series of explosions outside Itihadiya Palace in Heliopolis that claimed the lives of two policemen and called on the security forces to do more to prevent such incidents form reoccurring.

The Ministry of Health confirmed the deaths of the two explosives experts, Ahmed Amin Al-Ashmawy and Mohamed Lotfy, and the injury of thirteen others in a Monday statement. Ten were transferred to the Police Hospital in Nasr City and the other three to civilian hospitals. The deceased were attempting to dismantle the explosive devices.

In a Monday statement the Salafi Al-Nour Party condemned the bombings and called on the security forces to make “proactive moves” to “detect the movements of criminal elements before [they] commit such terrorist acts” adding that this is the “primary role of the security services”.

Militant group Agnad Misr published a statement last Friday on social media warning that it intended to plant explosives in the vicinity of the palace, providing a precise location.

The Strong Egypt Party said on Tuesday: “terrorist operations must be condemned”. The party’s spokesman Ahmed Imam added that there must also be an end to “the use of police brutality as an arm of the regime” adding that the security forces should “preserve the required security and the lives of Egyptians, without exception”.

Al-Jamaa Al-Islamiya expressed its rejection of the incident calling on “everyone to abandon the spirit of revenge” and stressed the need for a political solution to achieve “genuine reconciliation of all the sons of the nation and not to the interests of some of them”.

The Minister of Culture Gaber Asfour and Minister Religious Endowments Mohamed Mokhtar Gomaa both condemned the bombings during a joint press conference on Tuesday morning. The ministers called for those that “support” for terrorists “is a betrayal of the “great nation” and called for the dismantling of “these forces and their supporters or satellite [groups]”. They also called for regional efforts to combat “these dark forces”.