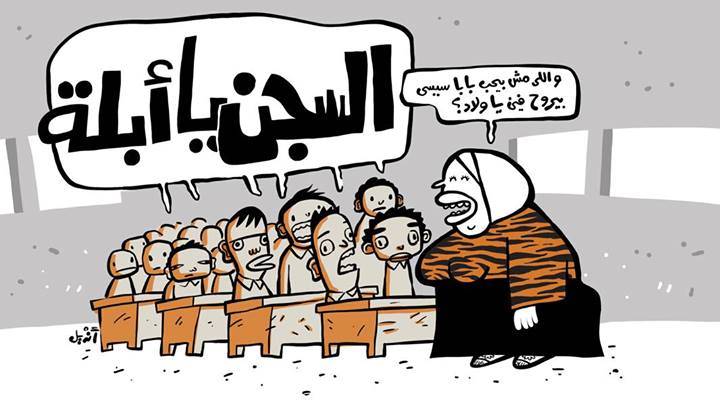 “I know what is good for you,” says the giant man as his hands, the only part of him showing, tightly close a red-lidded jar, trapping a small young man inside.

This is how 28 year-old political cartoonist Mohamed Qandeel, or Andeel as he prefers to be called, illustrates the Egyptian state.
He drew the cartoon after government officials announced the Protest Law, which gave the Ministry of Interior the authority to cancel, postpone, or change the location of any protest. But it could just as well serve to illustrate how many cartoonists feel since former president Mohamed Morsi was ousted from power last summer.
Political cartoonists have historically played an active part in documenting and voicing different views about political developments in Egypt, but since the ouster of former president Mohamed Morsi, cartoonist say it has become more taboo to draw the country’s leaders in an unflattering light.
Morsi was drawn as “Big Brother”, Mubarak was drawn as a thief in a prison uniform, and both were drawn as the sphinx. But, over the past year, President Abdel Fattah Al-Sisi, has rarely been portrayed or criticised in political cartoons published in major Egyptian news outlets, said Jonathan Guyer, senior editor of the Cairo Review for Global Affairs, who keeps a blog monitoring trends in Egyptian cartoon art. He attributes the silence to the fact that “the military is an institution that has much respect.”

Al-Sisi has rarely been drawn at all; instead, he was referred to using illustrations of military officers or using the word “the military”, Guyer said. In one of the few cartoons where he is pictured, Al-Sisi was drawn holding a puppet that had the interim president, Adly Mansour’s face.
Some cartoonists, like Andeel, however, are trying to push against the grain by using more informal means of distribution, such as social media. To dodge censorship, many have started using fresh symbols to portray old ideas.
“A cartoonist is always in a fight with red lines,” Andeel said. “He is an annoying bee to any regime, so it is very important for cartoonists to put pressure on regimes for the best.”
The cartoonist started criticising the current regime a few days after it rose with Morsi’s ouster.
In one of his cartoons, he drew a group of smiling Egyptians holding flags, their clothes and faces stained with blood. Beneath the drawing, he wrote, “The Joy of the great Egyptian people.” In another, he drew Al-Sisi’s likeness on a billboard, looking over Egypt, fiercely ordering people to “Enjoy Eid,” the Muslim holiday during which many Egyptians were still protesting Morsi’s ouster via sit-ins at Rabaa and Al-Nahda. A few months later, Andeel drew two Egyptians building a statue of Al-Sisi as a pharaoh, the symbol of autocracy in the Egyptian culture.
Cartoonists have to make use of the widest margin of freedom available for them, whether in published work or online, Andeel said. Every step forward adds to their territory.
A cartoonist is “a bullet that is being fired for the sake of the audience,” he said. “We are all in a group battle.”
Andeel’s battles for a wider margin of freedom were not always with the regime, they also included internal battles within an independent institution.
The cartoonist quit his job at Al-Masry Al-yom, an independent local newspaper, after the organisation shut down a series of cartoons expressing opposition to Al-Sisi.

“There were some pieces that were never published because they were different than my employer’s views, particularly those opposing the military,” he said.
Increasingly, the political divide between cartoonists is illustrated in the symbols they use in their art, Guyer said. Pro-government artists who work for the national press have begun to revive old symbols, such portraying Egypt a beautiful young woman being rescued, or a mother. Those in independent media who oppose the new regime, like Andeel, on the other hand, have begun to invent new symbols.
“I think the younger cartoonists are bored of the classic symbols,” he said. Young cartoonists try to “invent their own symbols” instead of sticking to the “old school” norms, such as portraying corrupt officials as a man with stacks of money and a cigar, or drawing Egypt as a woman, which many believe highlights a “sexist view” of Egypt, he said.
Guyer argues that the trend toward retro symbols has more to do with artistic drive than politics.
“I think they are lazy,” Guyer said. “Not creating new symbols is a reflection of the absence of creativity.”
Andeel, however, draws a relationship between the current political context and the original context in which the old cartoon symbols were created. Using fresh symbols, he said, is one way to dodge censorship.
“The nationalist representation has always been there,” he said. As new symbols emerged over the past couple of decades, however, these ideas became less popular. Now, with the revival of “old” political ideas, some of the “old symbols” are becoming popular again, he said.
The idea of portraying Egypt as a “fertile, beautiful woman of strength and pride” was a response to the “autocracy and nationalist ideas” of the 1960s, he said. He prefers to portray Egypt as houses. “To me Egypt is this landscape – the urban face,” he said.
The rising generation of political cartoonists grew up on the internet, so they draw inspiration, not only from “old school” political cartoons, but also online memes, foreign comics, and animated films, he said.
Despite the pressure censorship puts on cartoonists, it pushes their creativity to create interesting work, Andeel said.
“Readers like to see something that provokes their thinking,” he said.