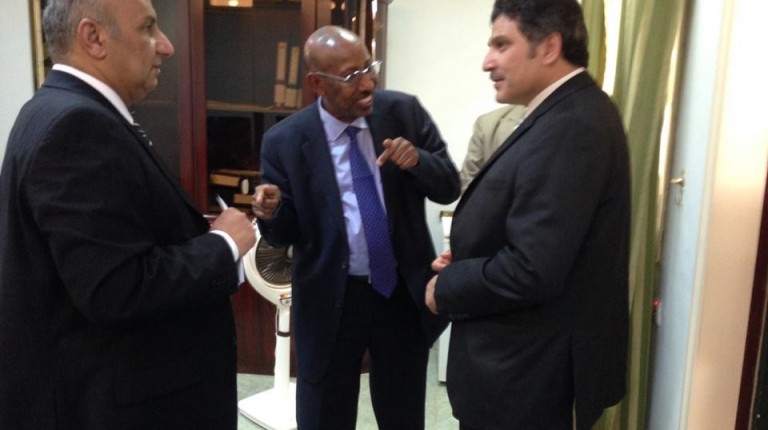 Egypt’s Water and Irrigation Minister Hossam El-Din Moghazy discussed the Ethiopian dam and the Nile Basin Initiative (NBI) while in Sudan, his first trip abroad since his appointment as minister.

Moghazy led a delegation to the neighbouring country where he held talks with Sudanese Minister of Water Resources and Electricity Mutaz Musa. While discussing the NBI, Moghazy expressed Egypt’s aspiration in Sudan playing a role in bringing the views of Nile Basin countries closer since Musa is the current chairperson of the Nile Council of Ministers, a statement by Egypt’s Water Ministry said. Musa asserted that he has intentions of making efforts with Nile Basin countries in this regard.

The invitations come days after Egypt and Ethiopia announced in a joint statement an agreement to form a joint committee within three months to streamline discussions on GERD. The two countries, outlined seven steps for the continuing construction of the dam. Egypt’s Foreign Minister Sameh Shoukry said the agreements provides “consensus in all aspects of relations between the two sides, bilateral and regional [and] in the fields of political, economic, social development.”

Bilateral talks between Egypt and Ethiopia in February had ended after failing to resolve the sticking points of the debate between the two countries.

GERD, which is currently being built on the Blue Nile, a major tributary to the Nile, has been a point of contention between Egypt and Ethiopia since Egypt fears that the dam will have a detrimental effect on its share of Nile water. The 1929 and 1959 agreements which guarantee Egypt the lion’s share of Nile water were signed in the absence of Ethiopia.