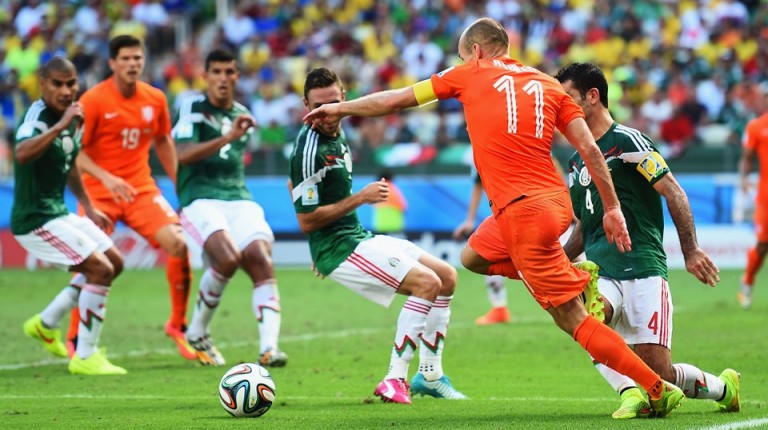 Eight teams remain in the World Cup following a week of thrilling encounters in a competition that has provided us with a continuous stream of fantastic football.

The teams that remain and will face off in the quarterfinals are hosts Brazil, Colombia, France, Germany, Netherlands, Costa Rica, Argentina and Belgium.

The round of 16 must not be forgotten though, as we witnessed some of the most exciting and tense football of the competition so far, with the added bonus of extra-time and, if you can handle the tension, penalty shoot-outs.

Controversy was also not far away from the competition this week as we had an admission of foul play from Netherlands star Arjen Robben and it emerged that the Cameroon Football Association has launched a match fixing investigation into what the president of the Cameroon Football Federation described as “seven bad apples” in the team. The accusations relate to the three Group A games with a focus on the teams 4-0 defeat to Croatia.

Regardless of the dark side of the game we have eight fantastic matches to look at and its fair to say that most of the teams going home early can do so with their heads held high.

The hosts kicked off the first game of the knockout stages against a Chile side brimming with confidence after two wins in the group stages against holders Spain and Australia. The Brazilians were held by the Chileans and forced into a dramatic shootout in which only one man can be the hero and in this case that man was Brazilian goalkeeper Julio Cesar.

David Luiz opened the scoring on the 18th minute with his first goal for his country, poking the ball in at the back post after a Neymar corner was knocked on.

It took just under 15 minutes for Alexis Sanchez to equalise and stun the home crowd, capitalising on a sloppy mistake by the Brazilians from a throw in. Sanchez received the ball on the edge of the box, picked his spot and fired the ball into the corner and out of reach of Cesar.

The exciting encounter needed both goalkeepers to be on form and the game went to extra-time in which the Chileans were denied by the crossbar with just seconds left before the first penalty shoot-out of the competition.

Cesar was the hero of the day, making two saves in the shootout. Neymar stayed cool under pressure to convert his spot kick leaving the weight of responsibility on Gonzalo Jara who fired the ball to the right hand side of Cesar. He dived the right way but was not needed as the ball rebounded off the post, sending Brazil to the quarterfinals where they will face fellow South Americans Colombia.

Colombia saw off Uruguay who was missing forward Luis Suarez who received a nine match international ban and a four-month suspension from all football-related activity having been judged by FIFA to have bitten Italian defender Giorgio Chiellini earlier in the tournament.

There was a different star on display last Saturday as James Rodriguez found the net twice to put his side through to the quarterfinals and put him in the lead on the top scorers list with five goals in the tournament. His first goal came just before the half-hour and it was one to remember; Rodriguez received the ball on the edge of the box, controlled it on his chest and volleyed it into the top left hand-corner of the goal from 25-yards, another contender for goal of the tournament.

The Colombian was on target again 20 minutes later as he got on the end of a string of passes to double his team’s lead, which was enough to see them past a weakened Uruguay.

Mexico will feel hard done by to have been knocked out after Netherlands forward Robben admitted to diving in the first half of the match, but insisted that he was fouled in the last minute. Mexican Captain Rafael Marquez did touch Robben’s foot when he went to challenge him inside the penalty box in the dying minutes of normal time. Robben went over theatrically to secure a penalty, which Klass-Jan Huntelaar converted to send the Dutch through to a quarterfinal matchup with Costa Rica. Robben denied diving in the last few minutes but apologised for diving in the first half.

The penalty completed a late Dutch comeback after former Tottenham Hotspur player Giovani Dos Santos scored just after half-time with a beautiful strike from 25-yards. It took until the 88th minute for the Dutch to respond, seeing Wesley Sneijder drive the ball through a crowded penalty box, leaving Mexican goalkeeper Ochoa with no chance of making a save. The keeper had once again made some vital saves in the match but the Mexicans were undone by the last-minute penalty, leaving them heartbroken and with a ticket back home.

The French left it late against Nigeria, with Paul Pogba putting in a strong display to set up a quarterfinal match with the Netherlands.

The Nigerian’s had a goal disallowed for offside before a volley from Pogba forced a save from Tottenham keeper Hugo Lloris.

After half-time the French came out strong and Liverpool midfielder Victor Moses had to clear a Karim Benzema effort off the line to keep Nigeria in the match. Nigeria turned the game around and dominated parts of the second half but were undone when goalkeeper Vincent Enyeama failed to get a strong hand on the ball from a corner allowing Pogba to head into the net at the back post. The French victory was sealed in the dying moments of the game when Joseph Yobo put the ball into his own net from a Mathieu Valbuena cross. The score line was not a reflection of the game as Nigeria put in a huge effort, but was unable to convert their chances.

Algeria and Germany played out one of the best games of the tournament, going to extra time and kept crowds on the edge of their seats until the last moment.

The Algerian threatened to upset the three time champions several times during the 90 minutes and the Germans lacked the ruthless finishing that we are so used to seeing from them. That is not to take anything away from Algerian goalkeeper Rais Mbolhi who put in a great performance, as did Manuel Neuer who kept his team from conceding between the posts and also in his role as a ‘sweeper keeper’ positioning himself just outside the box to deal with long balls fired over the defence.

The sides could not be separated after 90 minutes and it seemed that Algeria had it in them to take the game to penalties. However the North African side made the worst possible start to extra-time, conceding to an unorthodox finish by Andre Schurrle, connecting with a low cross from Thomas Müller.

The Algerians continued to work hard and had a couple of chances in the remainder of extra time but the Germans appeared to seal the game in the 118th minute with a Mesut Özil goal, but the Algerians were not quite finished. Abdelmoumene Djabou slotted home a cross from Sofiane Feghouli in injury time. One last effort from Madjid Bougherra was saved and the Algeria’s World Cup came to an end.

Germany advance to play their European neighbours France in the quarterfinals.

Both teams were playing in the knockout stages of the World Cup for the first time and the game was full of drama seeing the Greeks grab a late equaliser to take it to extra time.

The Costa Ricans took the lead in the 52nd minute through Bryan Ruiz who shot with his left foot from just outside the penalty area. The Central Americans went down to ten men in the 65th minute when Oscar Duarte was sent off for a second bookable offence.

It seemed that the Costa Ricans had won the match but in the 90th minute Sokratis Papastathopoulos scored to send the game to extra time, to the dismay of the Costa Ricans. Keylor Navas had stopped the first shot only to knock the ball to Papastathopoulos who swung a leg at it and was on target for his first international goal. Navas had pulled off seven saves before the Greek goal.

The score remained tied after extra time and penalties were in order. The first seven penalties went flying in and with Costa Rica 4-3 up Theofanis Gekas stepped up, only to have the impressive Navas deny him a goal, which allowed Michael Umana to score and send his team through to meet the Netherlands in the quarterfinals.

It took Argentina until extra time to finish off a resilient Swiss side, that continued to press until the last and could very nearly have take the game to penalties.

The Argentineans, whilst dominating possession, put in a quite average performance against the Swiss who focussed more on deflecting the Argentinean threat than driving forward themselves. The defence paid particular attention to Barcelona star Lionel Messi who often found himself surrounded by red shirts when in possession.

The Swiss created a good chance in the first half, but goalkeeper Sergio Romero saved Granit Xhaka’s shot and had to be alert again to save a long-range effort from Stephan Lichtsteiner.

Argentina was unable to crack the disciplined Swiss defence, Messi coming closest by hitting the crossbar in the second half, and the game went to extra time.

Real Madrid star Angel Di Maria finally managed to score in the 118th minute of the game after Messi dribbled the ball to the edge of the penalty box to put him through on goal. The drama did not end there as the Swiss were able to conjure up one last effort that saw Blerim Dzemaili’s headed effort hit the post and rebound onto him only to end up going over the line but on the wrong side of the post.

USA goalkeeper Tim Howard put in the performance of the tournament so far making 15 saves in the match, the most in World Cup history.

The Belgians dominated the first half with the USA mustering up only a few chances. In the second half the contest heated up and saw Howard make save after save to keep his side in the match. The USA was able to counterattack several times putting together a string of near misses but not finding the target.

Kevin de Bruyne finally broke the deadlock in the 93rd minute slotting the ball into the corner leaving Howard despondent in the goalmouth having played so well to keep his side in the game. Romelu Lukaku was brought on for extra time and was instrumental in the first Belgian goal and was able to turn in one of his own just before the end of the first half of extra time. His physical presence and fresh legs caused problems for the tired USA defence, but the Americans did not give up.

German coach Jurgen Klinsmann introduced Julian Green for the second half of extra time and the move proved to be a smart one. Green ran on to a through ball from Michael Bradley to score with his first touch of the ball in the game in his World Cup debut.

The USA had one final opportunity and worked a clever free kick from the edge of the box but was unable to execute the move. The Belgians went through and will face Argentina in the next round.