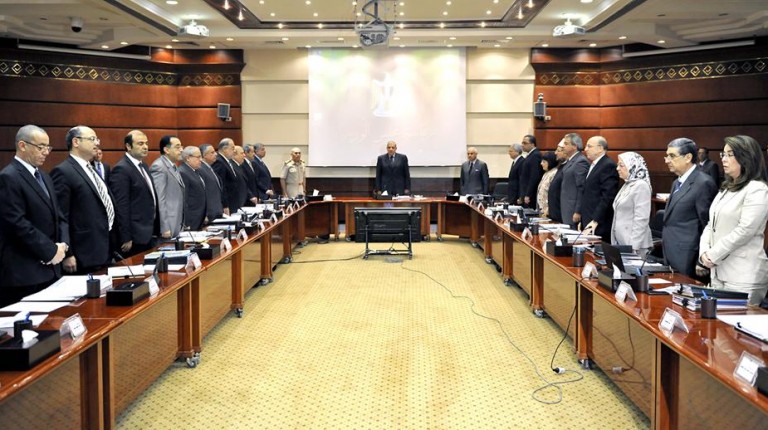 Interior Minister Mohamed Ibrahim discussed measures being taken by the ministry to combat terrorist acts during the cabinet’s weekly meeting on Wednesday.

The meeting began with a moment of silence to mourn the deaths resulted by the series of explosions that went off outside the Presidential Palace, earlier this week. Prime Minister Ibrahim Mehleb said: “These criminal incidents will not deter the government form completely uprooting terrorism,” a statement released by the cabinet said.

Ibrahim vowed to “cleanse the country of all criminal hotspots” and said people suspected of involvement in the latest bombing were arrested.

On Monday, a series of blasts outside the Presidential Palace left 2 policemen dead and injured 13 others. The deceased were explosives experts who died while attempting to defuse the bombs.

The incident led to criticism of security forces by political parties. It came after militant group Agnad Misr published a statement last Friday on social media warning that it intended to plant explosives in the vicinity of the palace, providing a precise location.

Meanwhile Interior Ministry spokesman Hany Abdel Latif said in a video statement on Wednesday that suspects involved in bombings that took place inside the metro stations last week were arrested.

The blasts took place in Shubra Al-Kheima, Ghamra, Hadayek Al-Qoba, and Ezbet el Nakhel stations. Abdel Latif said three people suspected in the Shubra Al-Kheima explosion were arrested, one of which was injured during the blast. The video showed the suspects confessing to the accusations, providing details on the incident.

The interior minister met with President Abdel Fattah Al-Sisi on Tuesday, one day after the Presidential Palace bombings. An Interior Ministry spokesman could not comment on whether these bombings were addressed but a statement by the ministry said the meeting covered terrorism and the observation of human rights protocols.