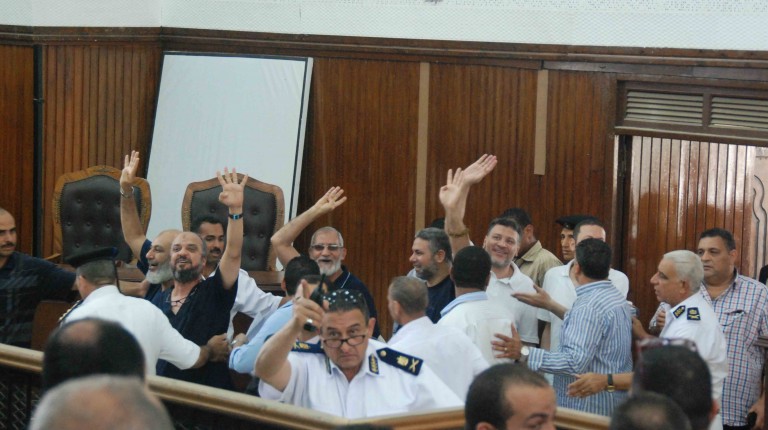 Ten people were sentenced in absentia to death by hanging on Saturday morning on charges of murder, inciting violence and blocking a road.

The Shubra El-Kheima Criminal Court handed 37 others life sentences (25 years in prison) and ordered to pay an EGP 20,000 fine. Those sentenced will also be subject to five years of observation upon release, according to defence lawyer Osama Al-Helw.

Badie, Hegazy and Al-Beltagy provided their own defence in court, with Badie claiming the Brotherhood has never committed any acts of violence.

The maximum possible sentence is handed to those tried in absentia, as per the law.

The sentencing, announced at the Tora Prison courtroom, also required all defendants to contribute money towards paying the Ministry of Interior EGP 6,000 for damage done to two ministry-owned cars. The judge also ordered the confiscation of funds and assets of those who received life sentences. Assets for the Freedom and Justice Party assets, the Muslim Brotherhood, and an NGO set up by the group in 2013, were also confiscated.

Al-Helw said that two of the ten sentenced to death were arrested on 11 June but were still tried in absentia. He also stressed that these death sentences were confirmed on Saturday following the preliminary sentence on 7 June. The sentences were handed to Grand Mufti Shawky Allam for his consideration.

The 48 defendants faced charges of murder, inciting violence and blocking the Cairo-Alexandria agricultural road in Qaliub in July 2013 following the ouster of former President Mohamed Morsi that month.

Among those tried in absentia were the Muslim Brotherhood’s internal mufti Abdel Rahman Al-Barr, Salafi preachers Mohamed Abdel Maqsood and Gamal Abdel Hady, according to Ali Kamel, member of the Committee to Defend the Opposers of the Coup.

Badie was handed two death sentences in June, one preliminary and one ratified. Death sentences that have been upheld will be automatically handed to the Court of Cassation for appeal and if accepted a retrial will be ordered.