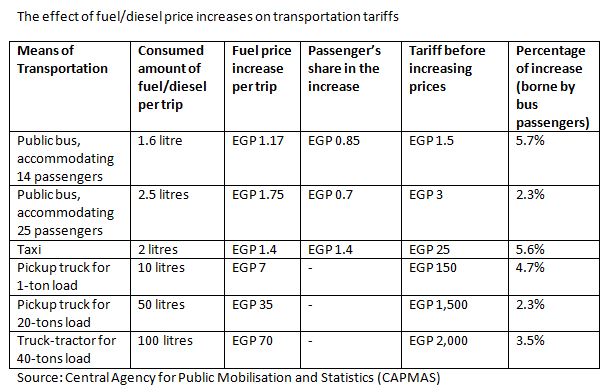 Following the government’s decision to raise the prices of automotive petroleum products, including fuel, diesel and natural gas, starting Saturday, reports from the street have indicated a rate of increase in transportation fares of between 35% to 50%.

This comes contradictory to Central Agency for Public Mobilisation and Statistics (CAPMAS) estimates released Saturday that public transportation fares would rise between 2.3% and 7%.

In the report, the agency detailed how diesel-fuelled buses will increase fares, adding that taxi fares will be increased by 5.6%. Prime Minister Ibrahim Mehleb mentioned in a Saturday press conference that the base fare for white taxis will start at EGP 3, up from the current EGP 2.5.

Meanwhile, fares for the use of transport vehicles will increase between 2.3% to 4.7%.

Dalia Moussa, researcher at the Egyptian Centre for Economic and Social Rights (ECESR), projected that transportation fares will keep increasing. She attributed the increasing continuous increases in food and industrial products to the rise in fuel costs.

“Fares have to be increased because drivers will be unable to bear the increases,” Moussa said, adding private buses’ fares, over which there is no government control, will increase too.

“The government should have applied a certain pricing strategy and transport monitoring system before issuing a decision so as to help low-income citizens,” Saad El-Din said.

He added that transportation fares have been continuously increasing since the 2011 January revolution.

The Public Transport Authority controls over 4,000 buses serving 3.5 million passengers every day, according to official figures.

Petroleum subsidies have been cut to EGP 100bn for the 2014/2015 fiscal year (FY), compared to EGP 134bn for FY 2013/2014. The transportation sector along with railway, contracting, and industrial sectors collectively owe the Ministry of Petroleum EGP 63bn.

The government’s decision originally followed a Prime Minister meeting to discuss methods of controlling transportation fares in the coming months. During the meeting, the government has approved to raise fares as a solution to finance the growing budget deficit.

In a Friday cabinet statement, Prime Minister Ibrahim Mehleb called on Egyptian citizens to “understand the challenges” and support the government in its reform efforts.

CAPMAS issues official increases in transportation fares inside, outside the capital