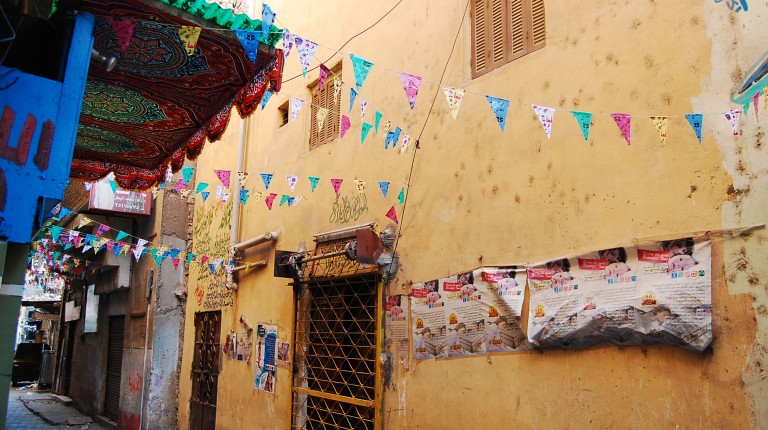 By Mohamed Anis and Lucia Admiraal

Ramadan provides an annual opportunity for restaurants to show off their best meals for the hungry fasting crowd. The food business thrives as customers line up to find a seat in dinner halls, fast food outlets and ‘shaaby chic’ kitchens.

But there are other establishments to choose from once you’re done with lengthy family dinners at home; local places only known by name and neglected by reviewers. We, a meat-loving Egyptian and a flexible vegetarian foreigner with a shared love of food, go on a culinary quest through the streets of Cairo to experience Ramadan beneath the surface.

While repeating this phrase, we start our food hunt through Islamic Cairo during the hungry hour leading up to iftar. We’re on the “residential side” of the busy road leading to Al Azhar, skipping the kitschy romance of Khan El Khalili and dazzling mirrors of El Fishawy cafe.

However, the clothing sellers and vendors here don’t seem very willing to uncover the area’s culinary secrets and prefer us to have a bite in the souk or the nearby “oriental McDonalds” called Gad. But we are not to fall into this trap. We didn’t cross the busy street that cuts through Islamic Cairo to be sent straight back into the hands of hassling waiters offering overpriced kofta or feteer.

Luckily, the countless shops selling belly dancing outfits and Spongebob underwear soon give way to narrow streets, lit up by Ramadan decorations and filled with the smell of fresh kunafa sweets and pickled vegetables. Entering a small candle factory young kids invite us to glance at the nearby minarets as seen from their rooftop. With these surroundings, one might almost forget to find proper food before sunset.

Almost. Our appetite dictates that we save the fairy tales for later. We turn left just before the medieval tentmakers bazaar into a street dominated by honking youngsters on Vespas. Luckily, everyone here seems to agree on what should be our authentic food destination for the night: El Shabka.

Literarily meaning ‘engagement ring’, this name leads to inevitable jokes while asking for directions. Further confusion is caused by the fact that there are three restaurants called El Shabka in the same street, and two others close by. Which one to choose without offending anyone?

“Go to the second one,” we are told. “They’re all the same,” another one says.

We follow our instinct (and demanding stomachs) and sit down at El Shabka 1. The owner, Meallem Faares – a man in his fifties – is visibly worried about strange visitors and unwanted exposure, but still claims to serve high quality balady food. His restaurant is the oldest, founded by his father Abdel Fattah el Shabka, the others being owned by his four brothers.

He seems hesitant to tell us more about the story behind this remarkable family business so we decide to order first. Copying some joyful old men around us we choose a tajine of meat, potatoes, peas and onion from the oven. Well before seven, our table is filled with the tajine, turshy, soft okra, beans, soup, bread, chicken and duck on rice.

The tajine is evidently the most popular dish here. Simple, but with lots of flavor and served in a nice black stew. The so-called ‘birds tongues’ soup is cold, but who is to blame as long as everyone can eat ‘primetime’? Although never a foreigner’s favorite, turshy of pickled carrots had never been so much fun. The chicken and duck could compete with those produced by Egyptian grandmothers. Teslam el ayaadi, we almost say while looking at the Sisi poster on our side.

Fully satisfied we stumble further along the old streets, but no iftar is complete without desert. While we try small spoons of heavily sweetened Sobya – something in between rice pudding and ice cream, served in a plastic cup and covered with cinnamon – we suddenly realize Faares did not divulge the full story of El Shabka and his four brothers. It seems like a fairy tale indeed, but we will only know whether the story is as exciting as it sounds if we come back for some more tasty stew.

Price:  EGP130 gets you enough food for three