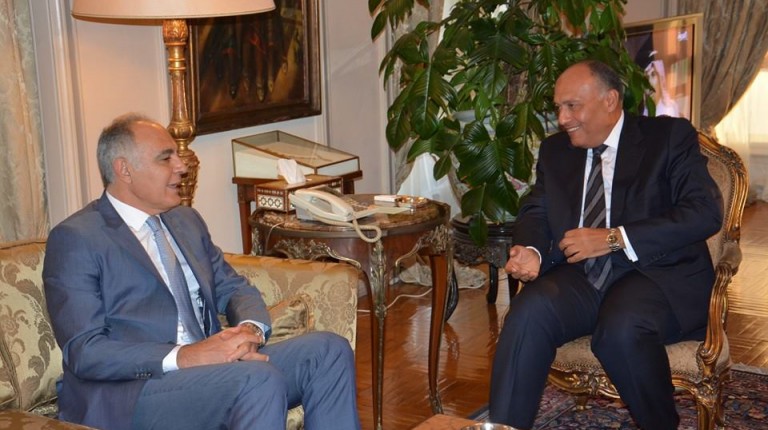 Egypt’s Foreign Minister Sameh Shoukry discussed the deteriorating situation in neighbouring Arab countries, such as Iraq and Palestine, with his Moroccan counterpart on Saturday.

Moroccan Minister of Foreign Affairs and Cooperation Salaheddine Mezouar arrived in Cairo on Friday night on a two-day trip. The minister met Egypt’s President Abdel Fattah Al-Sisi on Saturday to deliver a letter from King Mohamed VI of Morocco.

Shoukry and Mezouar discussed the situation in the Palestinian territories, condemning the violence which reignited in the West Bank.

The foreign ministers called on the Israeli authorities to “seriously” investigate the murder and bring to justice those responsible for it.

Shoukry and his Moroccan counterpart stressed that this “escalation” is a result of the stagnant negotiations between Israel and Palestine and the former’s continued occupation of Palestinian lands. They also noted that Israel’s policy of expanding settlements leaves no room for negotiation as “settlements are built on the Palestinian lands whose future should be negotiated”.

Commenting on the situation in Syria and its spillover to Iraq, the foreign ministers stressed the importance of “reaching political solutions which would allow the involvement of all factions of the Iraqi society in governance… to retrieve unity and face extremism and terrorism”.

The Syrian crisis spilled over to its neighbour Iraq when Islamic State Sunni fighters began seizing parts of Iraq in June, creating a humanitarian crisis. The situation in Iraq left 2,461 killed in June and over 1 million people displaced, reported BBC, citing United Nations and Iraqi sources.

On 30 June, jihadist group the Islamic State, formerly known as ISIL, announced the establishment of a Caliphate or Islamic State in Iraq, led by group leader Abu Bakr Al-Baghdadi.

An Egyptian foreign ministry statement released on Saturday said that Shoukry is in contact with several Arab countries to exchange views on the situation in Iraq and reach common ground that could help support “this brotherly country” and guarantee the restoration of its security and stability.

Shoukry also discussed the situation in Libya with his Moroccan counterpart. Both ministers congratulated the Libyan government on holding parliamentary elections despite the difficult security situation there. They nevertheless expressed their concern regarding the North African country and their keenness on its stability, which they said can be achieved through building state institutions after the electoral process is over.

Libya’s foreign minister Mohamed Abdulaziz arrived in Cairo on Friday to discuss his country’s security challenges with his Egyptian counterpart. He is scheduled to meet with Shoukry on Sunday, reported state-run news agency MENA.

The Libyan minister arrives for the talks in the wake of meetings conducted by Shoukry addressing the issue of Libya’s security issues, which threaten to spill over its border with Egypt.

Former Libyan rebel General Khalifa Haftar launched a campaign in May to root out “terrorism” in the coastal city of Benghazi; however, the authorities have denounced his actions, labelling him an outlaw, while Al-Qaeda in the Islamic Maghreb labelled him “an enemy of Islam”.

During their meeting, Shoukry and Mezouar followed up with the preparation for the next Egyptian-Moroccan Joint Supreme Committee session.

Al-Sisi told Mezouar during their meeting that Egypt looks forward to advancing bilateral relations between both countries, especially since they face joint challenges threatening their national security within northern Africa and the Sahel region, including terrorism and extremism.

King Mohamed VI of Morocco was among the foreign dignitaries who attended Al-Sisi’s inauguration ceremony on 8 June. Upon the official announcement of the presidential elections’ results on 3 July, Morocco’s King Mohammed VI congratulated Al-Sisi. King Mohamed VI said that he is convinced Al-Sisi has the qualities of “a veteran statesman” and the “qualifications of an insightful leader” to support him in undertaking this responsibility.