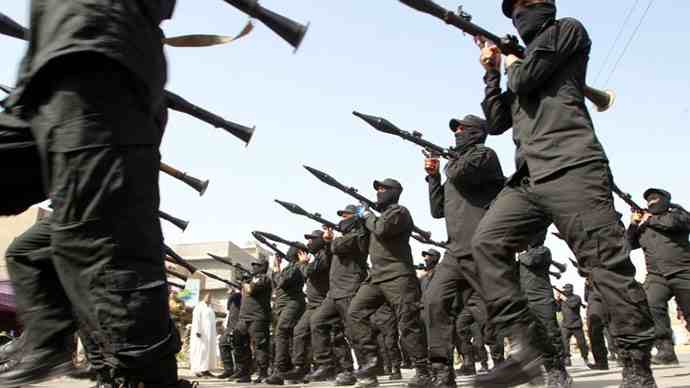 A man claiming to be the Caliph of the Islamic State, Abu Bakr Al-Baghdadi, made his first public appearance at a Mosul mosque on Friday to give a sermon demanding obedience from his followers just over a week after Al-Baghdadi was announced Caliph.

The black-clad and bearded Al-Baghdadi, who was referred to as Caliph Ibrahim in the video released by the Islamic State, gave his sermon in the Great Mosque of Mosul. He told his followers: “I am the wali [leader] who presides over you, though I am not the best of you. So if you see that I am right, assist me.”

“If you see that I am wrong, advise me and put me on the right track, and obey me as long as I obey God,” he added.

The leader also called for his followers to join in jihad to restore the caliphate, calling it the highest level of obligation.

Al-Baghdadi’s speech comes at the end of the first week of the Islamic holy month of Ramadan and nearly a month after his army, then called the Islamic State of Iraq and Al-Sham, or ISIS, stormed across Iraq capturing the ancient city of Mosul. His forces have been steadily approaching Baghdad since.

The 43 year old Al-Baghdadi, who had spent time in an American prison after the US-led invasion of Iraq, was named the Caliph of the Islamic State by IS spokesman  Abu Mohammad Al-Adnani on 29 June.

Al-Baghdadi has quickly become one of the most wanted militant leaders in the world.

Fighters allied with Al-Baghdadi have been posting images of the destruction of Shi’a mosques and shrines to social media, sometimes razing the ancient monuments and mosques with explosives, and sometimes carrying out the work by bulldozer.

Militants have vowed to continue to destroy Shi’a mosques and shrines that they believe stand in opposition to their hardline Sunni viewpoint.

On Saturday, Iranian state media announced that an Iranian pilot had been killed in Iraq, signalling that the Shi’a-led government in Tehran is supporting Iraqi Prime Minister Nouri Al-Maliki’s fight against the Sunni Islamic State.

Iran’s participation in the conflict has led to fears that the fight against Al-Baghdadi and his Sunni Islamic State will devolve into a sectarian civil war like Iraq witnessed in 2006-2007 which cost tens of thousands of lives.