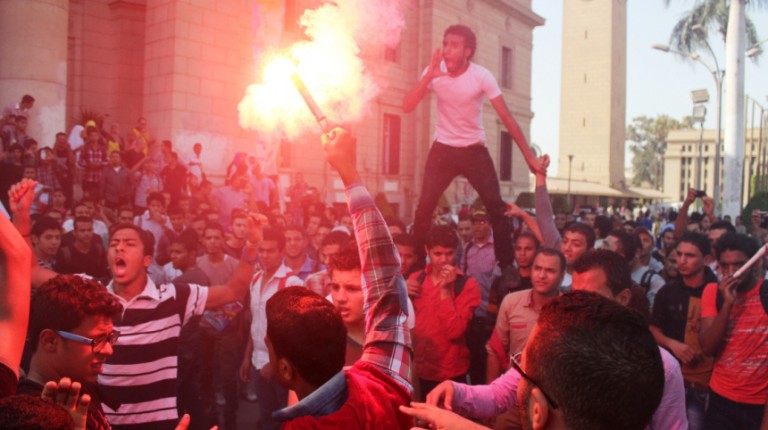 Egypt witnessed 5,232 socio-economic protests in 2013, 82% (4,567) of which were held before the military ouster of Islamist former president Mohamed Morsi, according to a report prepared by the Egyptian Centre for Economic and Social Rights (ECESR).

The ECESR annual report, released on Monday, tackles social, economic and labour protests held throughout the year. The report looks into the location of the protests, their type and the societal categories which stage them.

The report suggested that the Muslim Brotherhood protests held since July against Morsi’s ouster could have contributed to the decline in social, economic and labour protests in the second half of the year. The three latter categories resulted in 665 protests from July to December.

The ECESR said that social, economic and labour protests and the reasons behind them were not given due attention, where generalisation was exercised in defining them. The organisation added in its report that at most times, protesters were either described as belonging to a certain political faction, or the protests altogether were seen as a sign of the “failure” of the then ruling regime.

Cairo ranked highest among the governorates where the largest number of protests was held. An overall of 744 protests were held in the Egyptian capital alone, translating into two protests per day. Gharbeya and Alexandria governorates followed, with 312 and 311 socio-economic protest held in each governorate, respectively.

The ECESR noted that though more protests were reported within the state-owned sectors, studies suggest labourers at such sectors enjoy better working conditions than those working in the private sector. The organisation owed the high percentage of protests within the state-owned sectors to their organisational skills and the presence of labour unions to regulate such protests.

As for economic protesters, they included: vehicle drivers (48.68%), farmers (10.87%), and bakery workers and owners (6.94%). Fishermen and merchants were also among those who took part in economic protests.