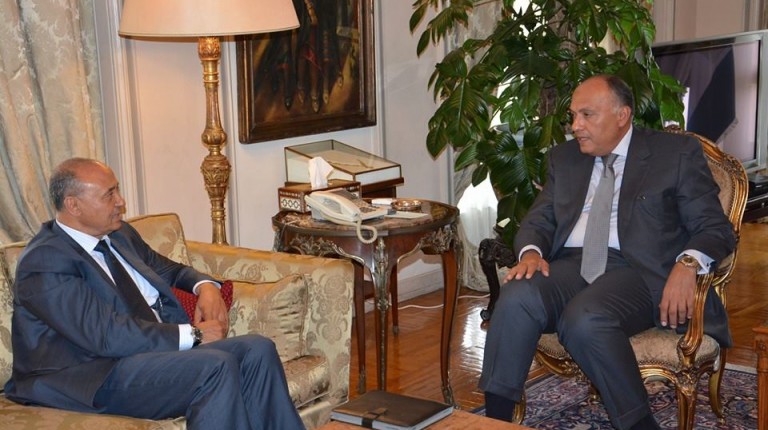 Egypt’s Foreign Minister Sameh Shoukry met with his Libyan counterpart Mohamed Abdulaziz on Sunday, when they addressed the latest developments in the neighbouring country.

Abdulaziz arrived in Cairo on Friday to discuss his country’s security challenges with his Egyptian counterpart.

Abdelaziz also stressed the efforts exerted by the Constituent Assembly to draft a new constitution.

Shoukry asserted Egypt’s interest in the latest developments taking place in Libya, especially the security situation there. Egypt is ready to offer all forms of support to build Libyan state institutions, he added.

“Libya is not just a neighbouring country or a country with a shared history,” a foreign ministry statement quoted Shoukry as saying. “There are strong relations and interests that tie both brotherly countries and their nations.”

The foreign ministers discussed preparation for an advisory ministerial meeting for Libya’s neighbouring countries, due to be held in mid-July in Tunisia.

They also prepared for another conference on Libya’s border security, scheduled to be held in Cairo. Egypt’s foreign ministry spokesman Badr Abdelatty had earlier said the conference would mainly focus on devising ways to help Libya keep its borders and consequently its neighbours secure against “terrorists’ weapon smuggling”.

The Libyan minister arrives for the talks in the wake of meetings conducted by Shoukry addressing the issue of Libya’s security issues, which threaten to spill over its border with Egypt.

Former Libyan rebel General Khalifa Haftar launched a campaign in May to root out “terrorism” in the coastal city of Benghazi; however, the authorities have denounced his actions, labelling him an outlaw, while Al-Qaeda in the Islamic Maghreb labelled him “an enemy of Islam”.

Shoukry also discussed the situation in Libya with his Moroccan counterpart Salaheddine Mezouar during the latter’s visit to Cairo on Saturday. Both ministers congratulated the Libyan government on holding parliamentary elections despite the difficult security situation there. They nevertheless expressed their concern regarding the North African country and their keenness for its stability, which they said can be achieved through building state institutions after the electoral process is over.

Tensions between Egypt and its troubled neighbour Libya have been on the rise recently as a string of killings and kidnappings has targeted Egyptian nationals. Egypt has issued and reiterated a travel warning for citizens travelling to Libya.