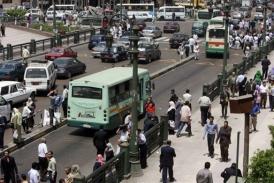 The committee is chaired by Prime Minister Ibrahim Mehleb and is comprised of Governor of the Central Bank of Egypt Hisham Ramez and the ministers of Finance, Investment, Industry and Foreign Trade, Planning, International Cooperation, Supply, Electricity, Petroleum, Housing, Transportation and Agriculture.

The Monday statement explained the cash injection aims to “develop the public transportation system within the governorates and doubling its fleet, including nearly 1,200 buses”. In addition to injecting money and more buses, the committee also agreed to develop the “style and method of the administration of the [transport] system… to serve the requirements of the Egyptian citizen and provide a service worthy of them”.

Interior Minister Mohamed Ibrahim stressed that “all decisions taken by the state is intended for the benefit of the citizen… for a better future for him and generations after him”, according to a Tuesday ministry statement.  The minister’s comments came during a tour of the Al-Oboor market where he met with shopkeepers and traders and “reassured” them in regards to “average prices and availability of goods”. He also stressed the “importance of their role in price stability and system reform adopted by the government”.

The Ministerial Economic Committee’s decision comes the day after Minister of Defence and Commander in Chief of the armed forces Sedki Sobhi ordered for the military to provide discounted food products and run additional bus routes to “ease the economic burden” for the Egyptian people.

Egypt’s official statistics agency, the Central Agency for Population, Mobilisation and Statistics, estimated transportation costs would rise by 7%, although reports on Saturday indicated the actual increase amounted to a 35%-50% rise in fares.

CAPMAS issues official increases in transportation fares inside, outside the capital