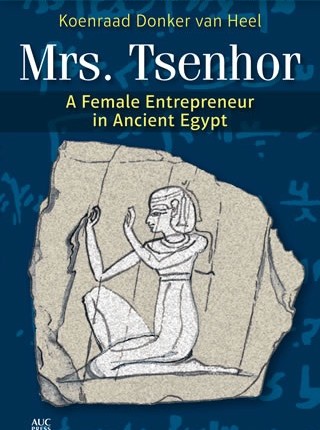 Death was big business to the Ancient Egyptians, with their tombs and reliquaries also providing some of the best information on their life and culture. In the intriguing new book, “Mrs Tsenhor: A Female Entrepreneur in Ancient Egypt”, Koenraad Donker van Heel introduces readers to Tsenhor, “sister of Horus”, a strongly spoken and highly independent working woman who made her fortune through the industry of death.

Born in 550 BCE in Karnak, Tsenhor is described as one of a family of chaochytes, hired to bring offerings on behalf of families to the dead in their tombs on the west bank of the Nile. Tsenhor inherited her work from her father, Nesmin, and continued this work alongside her second husband, whom she is described as having married on equal terms.

In exchange for her work, Tsenhor received food items, high quality farm land, foods amongst other things. Such was the demand for the services of chaochytes like Tsenhor, that she amassed not only a house that she could afford to restructure, but she also owned at least one slave and amassed an array of assets to her name. All this was done with little male input.

However, with a good chunk of surviving evidence, either unclear or written in a form of hieroglyphs that only a few Egyptologists can understand, van Heel has a tough job of creating a solid story around Tsenhor.

There is much speculation about whether she may or may not have had a male guardian, in line with Ancient Egyptian law, as well as very little confirmed evidence of what happened to her children who may or may not have died before her. Admittedly, this is due, in no small part, to the wear and tear of the ages, but there is also the slight issue of some scribes not writing dates as well as names disappearing and reappearing from papyri, seemingly at will.

And although the book’s title does suggest a primary focus on Tsenhor, there is almost as much information on other people unrelated to her. The frequent and rather long digressions get in the way of Tsenhor’s story, making it, on occasion, disjointed and broken apart.

The background outlines that Tsenhor was apparently not unusual for her day, with many other women also actively involved in aspects of ownership, forming legally binding contracts and owning slaves. But with such long-winded digressions onto other examples throughout the book, one almost forgets the book is predominantly about Tsenhor. There is a very large detour into the history of the day at several points with very little relation and draw in to how this impacted Tsenhor or her cohorts. The story is then brought back to its protagonist, Tsenhor, by the author giving an almost conversational break and “back-to-business” end to the historical discussion.

What we do learn however, is a very clear and interesting introduction to the industry of looking after mummies at the beginning of the book. One may find it morbid that a culture places so much focus on the dead, yet for Tsenhor and her fellow chaochytes, this was lucrative business, giving her the freedom to decide her own life, including who she married, decide on her “marriage contract” as well as how she divided up her assets in her will.

“Mrs Tsenhor: A Female Entrepreneur in Ancient Egypt” was published by AUC Press in May.