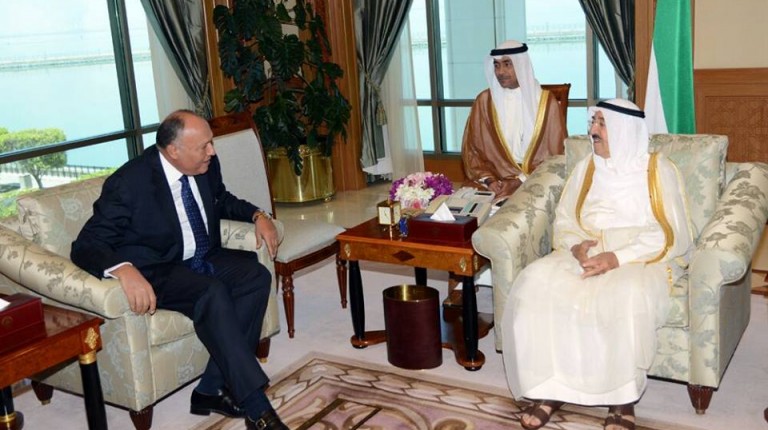 The foreign ministers focused on “the escalation [of violence] in the Palestinian territories” and the situation in Iraq and the Levant which pose a threat to regional stability.

Kuwaiti foreign minister Al-Sabah said Egypt should “play a central and influential role in order to maintain on the concept of the sovereign state”. He added that the situation of Iraq and Syria is crucial to Arab unity in the region.

The pair also discussed a donor conference in Egypt called for by Saudi king Abdullah bid Abdul Aziz, aiming to “mobilise investments that can be pumped into the Egyptian economy.”

Shoukry will visit Iraq Thursday as the next step of his Arab tour, to show Egyptian interest in the stability of their “Arab neighbour”.

Shoukry was asked to go to Iraq by President Abdel Fattah Al-Sisi to work on restoring stability and reconciliation in the country. This would come “in the face of serious threats to the security and integrity of Iraq.”

On Tuesday, Al-Sisi made a phonecall to Iraqi Prime Minister Nouri Al-Maliki, offering Egypt’s full support to Iraq in their worsening political and military crisis.

According to Presidential Spokesman Ihab Badawi, Al-Sisi called for a strong, inclusive state in Iraq that rejects the sectarianism of years past.