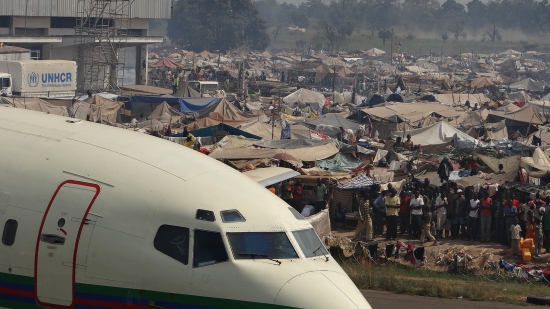 For a few weeks earlier this year, no one needs an alarm clock to wake up in Bangui. The sound of gunfire, sometimes sustained and heavy, has become a morning ritual in the Central African Republic’s (CAR) capital city. To most people here, identifying where the shots come from is a survival skill.

Worse still, since early December 2013, Christians, but more so members of the Muslim minority, risk their lives each time they venture out of their now segregated neighbourhoods – a troubling sign of a deepening religious divide. Killings happen daily. On occasion, cheering crowds have participated in chilling acts of lynching, only to return to normal life thereafter, as if nothing had happened.

On 5 February, not far from downtown Bangui, soldiers from the regular army lynched a suspected militia combatant. It did not seem to matter to them that journalists were filming the scene.

“It is as if the whole country has lost its senses,” Gen. Babacar Gaye, the UN Secretary-General’s Special Representative to the country, noted at a press conference a day after the incident.

“We have experienced instability before, but nothing like this,” Julien Bela, the editor of Centrafrique Matin, a daily, remarked.

Indeed, since March 2013, violence in CAR has reached unprecedented levels. Killings, acts of looting and other violations of human rights have increased as a political transition that started in January 2012 has progressed. By February 2014, a growing number of analysts and officials, including from the UN, were expressing serious concerns over the degree of human rights violations and had taken to describing the situation in chilling terms.

Since early 2013, thousands of Muslims (they represent around 15% of CAR’s over 4 million inhabitants) have been forced out of the country, in a mass exodus reminiscent of some of humanity’s darkest hours. On 20 February, UN Secretary-General Ban Ki-moon, submitted a six-point plan to the Security Council, urging the world to act now. “Today’s emergency is of another, more disturbing magnitude,” he told the 15-member body. “It’s a calamity with a strong claim on the conscience of humankind.”

Coalition of the unwilling

Events started spiralling out of control after a coup last March led by a loose coalition of armed groups calling themselves “Seleka” – meaning “alliance” in the Sango language. Founded in 2012 by rebel leaders from the mostly Muslim north, Seleka’s main grievance was the government’s failure to improve people’s lives, especially those from the outlying areas in the north. The rebels were able to recruit fighters from the mainly Muslim neighbouring countries of Chad and Sudan.

A power-sharing agreement signed in Libreville, Gabon in January 2013 between the Seleka, then President François Bozizé and the local political opposition ended on 24 March when the Seleka, frustrated by Bozizé’s refusal to effectively share power, took control of the government. This ended the first episode of what was to become a rocky political transition. “From the beginning, it was obvious that many of the actors of the transition where unwilling to be part of it. It was more of a coalition of the unwilling,” an analyst in Bangui remarked.

Once in power, the Seleka proceeded to loot private properties, ransack public offices and randomly kill those who resisted their rule. “At first we thought this would last for a week or two,” Julien Bela, the journalist, recalls. “But it soon became clear that they would not stop looting, raping and killing.”

A December 2013 report by the International Crisis Group (ICG), an organisation that works to prevent and resolve conflicts, noted that the coalition was mainly occupied carrying out “a countrywide, criminal operation that has no other motive than personal gain.”

In August, Michel Djotodia, the coalition and country’s new leader officially disbanded the Seleka, in an attempt to restore order. He even set up institutions for the transition, including a parliament and an electoral commission. But as the political transition stalled, and with the regular army on the run, the police, the public administration and the justice system no longer or barely functioning, the CAR became a “phantom state,” according to the ICG, where formal institutions were empty shells and insecurity a daily threat.

Seleka combatants, mainly Muslims, continued to loot and kill, particularly among the Christian majority. “They would arrive in a village and publicly kill all the men, targeting the Christians in particular, as if to make a point,” a journalist with Radio Centrafrique, the public broadcaster, recalled. By the end of last year, in response to these targeted and systematic abuses, self-defence militia groups, known as the anti-Balaka, emerged, first from the rural areas and then the cities.

Much like the Seleka Alliance, anti-Balaka groups are a loose coalition of minimally structured entities without a clear political agenda beyond fighting a common enemy. Anti-Balaka fighters wield machetes and sometimes firearms. Similar to Mai Mai militia of the eastern part of neighbouring Democratic Republic of the Congo, anti-Balaka fighters wear amulets believed to provide them with protection against bullets. Initially, they reacted in desperation, in defence of Christians and other non-Muslims. Their avowed enemies were combatants of the Seleka coalition.

On 5 December, the anti-Balaka launched an all-out assault on Bangui, killing not only Seleka fighters, but also a number Muslims suspected of siding with the Seleka. The fighting left at least 1,000 dead in just three days, the Red Cross reported soon after. The apparent religious undercurrent of the crisis became a troubling reality. Muslims in Bangui were forced out of entire neighbourhoods. The trend was to be followed in the countryside.

“Muslims and Christians have lived in harmony in this country for generations,” a number of public officials in Bangui remarked. In private however, others disputed such a rosy picture. A civil servant pointed to one of the grievances long-held by the Muslim minority: “How many Christian holidays are national holidays in this country? Many. How many Muslims holidays have the same status? None.”

By early January 2014, the CAR had become a battle field between the anti-Balaka (presented as Christian militias) and the former Seleka (with its mainly Muslim combatants). Around 5,000 African forces, now operating under the African-led Support Mission to the Central African Republic (MISCA), supported by some 1,600 French forces as part of an operation called Sangaris, were deployed over the following weeks. They quickly helped prevent mass killings, but security remained elusive, partly in Bangui but more so in the countryside.

Since the conflict erupted, a million people have fled their homes to live in camps, including some 100,000 camped at the capital’s airport. Thousands have sought refuge across the borders. Humanitarian agencies reported that half of the Central African nation was in need of assistance. Thousands of foreigners from neighbouring Cameroon, Chad and the Republic of Congo have been evacuated, including thousands of CAR’s Muslims.

Power to a woman

It is against such a dramatic backdrop that countries of the Central African region, at a meeting on 10 January in N’djamena, Chad, forced President Djotodia to resign over his failure to run an effective government and reign in his unruly fighters.   He was immediately flown into exile in Benin, West Africa.

Days later, the mayor of Bangui, Catherine Samba-Panza, was elected head of the transition by members of the transitional parliament. She is the fourth woman in Africa to hold the highest office. The new President appointed a technocratic government, promised to restore state authority and pledged to lead the transition until elections in early 2015.

After the new President assumed office, there was a lull in fighting; only to start again, prompting many observers in Bangui to ask whether Catherine Samba-Panza’s election changed anything on the ground. Under pressure from bolstered anti-Balaka groups and with the political tide against Seleka fighters, the latter retreated to the north and to neighbouring Chad

But insecurity persisted as the anti-Balaka morphed into vigilante groups around the country. Joined by opportunistic criminals and some youth, they started their own reign of terror, targeting anyone appearing to be a Muslim.

By the end of January, the head of the African Union peacekeeping force, Gen. Martin Tumenta Chomu, announced a crackdown against the lawless anti-Balaka groups. This was followed by a similar warning by Gen. Francisco Soriano, the commander of Sangaris, the French operation. A series of clashes ensued. By early March, after twelve months of political instability and persisting insecurity, there were still daily incidents in Bangui and around the country.

Beyond the daily tragedy, there are many questions from the events of the past months: Will the departed Seleka fighters who have left major towns with their weapons, defeated but not disarmed, return? How and when will the thousands of Muslims who left their homes and their country return? How will communities that have been torn apart rebuild their lives?  How will justice be carried out for the grave crimes committed in plain sight?

For now, in Bangui, answers to these lingering questions seem to be for the future or at least until the sight of soldiers posted in the city’s main streets, is no longer a banal occurrence, and the sounds of gunshots, heard so often at daybreak here, have receded or disappeared.

Diamonds are forever… a problem

“Nature scattered diamonds liberally over the CAR, but since colonial times foreign entrepreneurs and grasping regimes have benefited from the precious stone more than the Central African people,” writes the International Crisis Group (ICG) in a 2010 report, adding that “The French ransacked their colony of its natural resources, and successive rulers have treated power as licence to loot.”

Indeed, over the years before the current CAR crisis, illegal exploitation of natural resources fuelled corruption and deprived the state of much-needed resources. In 1993 for example, notes the ICG, “records showed that importing countries had received from the CAR 495,000 carats more than the total official exports.” For that year, the official diamond exportation of the CAR stood at some 494,000 carats.

Some 100,000 people are active in the mining sector but the most involved have always been the country’s presidents themselves, starting with Jean-Bedel Bokassa, the former self-anointed emperor. President Ange-Felix Patasse even ran his own diamond mining company from the presidential palace, while François Bozizé, deposed in March 2013, kept a tight personal control over the sector.

“In our country,” laments Julien Bela, the editor of Centrafric Matin, a daily newspaper, “our leaders have their minds only on the business of diamonds and nothing else. No one has a plan on how to develop agriculture or what to do with our youth.” Jean-Paul Ngoupande, a former Prime Minister, concurred: “In the Central African Republic, heads of state are first and foremost diamond merchants.”