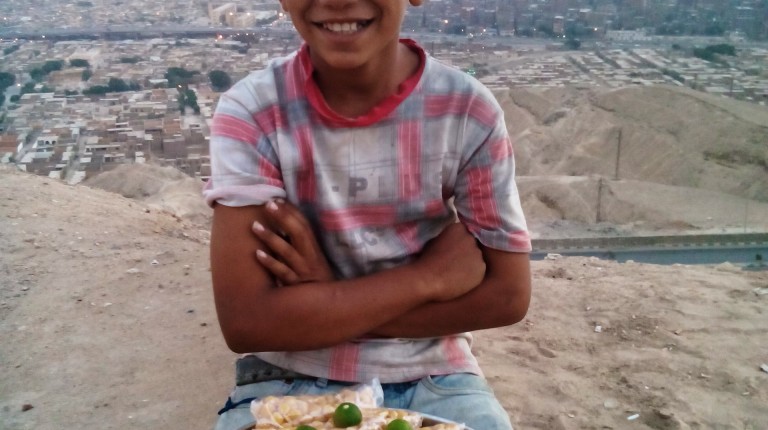 “What makes you the happiest?”

“When my father and mother are not fighting and he doesn’t beat her up,” said Gamal, an 11-year-old vendor selling lupine grain, as he smiled and posed for the picture.

Salma Hegab, a fresh graduate of Multimedia Journalism, posted the photo on the Facebook page “Humans of Cairo”.

The page is one of hundreds of “Humans of” pages inspired by American photographer Brandon Stanton’s phenomenally successful “Humans of New York”, a Facebook page with more than 7 million fans that posts street portraits of the city’s residents along with personal stories. Most of the copycat sites, like Hegab’s, attempt to localise Stanton’s idea to various cities around the world. But Stanton’s runaway success has also prompted a world tour to document the “Humans of the World”.

Hegab established “Humans of Cairo” more out of admiration than any desire for commercial gain, she said. Following other “Humans of” pages helped her get to know other cities and the diversity of their residents.

She started casually interviewing and taking photos of Cairenes she met on the street in 2012. Thus far, “Humans of Cairo” has attracted about 5,800 fans.

“I first suggested the idea in a tweet,” said the 23-year-old, who describes her photography skills as “minimal”. “But since no one started a page, I thought I should do it myself,” she said.

Throughout the course of the project, she has established a “love/hate” relationship with Cairo, she said. Although she wants to take pictures of all the neighbourhoods of Cairo, Hegab said she is unsure of “what she could face as a girl walking with a camera in the streets of Cairo”. She fears sexual harassment, mugging, or worse.

“My camera got stolen in a protest,” she said. “A fan volunteered to join me in a walk and let me use hers.”

Since former president Mohamed Morsi’s military-backed ouster, Hegab has found it hard to walk with a camera in the street, she said.

“People used to love being photographed,” she said. “Now a person with a camera is expected to be a spy.”

Hegab said she is committed to sharing what people say without censorship and without imposing her own views.

But with the collective mood of dissatisfaction over the past year, whether it is about the rise in prices or political events, most of the interviews Hegab does possess a sad tone, she said. As a result the website has garnered criticism for “showing only one side of the city” and presenting a “shallow” portrayal of people.

As “Humans of New York” was an inspiration for Hegab to localise the idea, it inspired Adrien Colombié to globalise it.

The 23-year-old French designer is leaving his country in August for an entire year, to work on his project “Humans of the World”. He will travel to 37 countries, including Egypt, to interview people across the world and create a series of 365 street portraits. According to Colombié, his project is unique because he is “not trying to take a snapshot of a city and the people in it”. Instead, it’s an attempt to “take a snapshot of the world in 2014/2015”.

To create a relationship to be reflected in the photos and stay away from “commercialising” the project, Colombié intends to spend time with the subjects of his photos, he said.

To illustrate how scale affects the perception of humanity, Colombié is planning to take 365 finger prints of the people he meets in a “playful” process of acrylic printing. People are all created the same way of bones, flesh and blood, but a close look shows how every individual has a unique personality and a different culture, he said.

“If 365 fingerprints were put together on a wall you will not see a difference between a black person, a white person, old or young,” he said. “But if you take two steps closer you will see how everyone is unique.”

Fans of the original “Human of New York” have different views on the trend’s spread around the globe.

Mohamed Wahdan, 29, a freelance graphic designer based in Heliopolis, said some “Humans of” pages, such as “Humans of Tehran” show “a personal side of their cities” and provide “different narratives” that were not available to him before about what happens in these cities. However, many “Humans of” pages publish photos only to have high viewership “by riding on the wave of the trend”, he said.

Depending on the photographer’s ability to “extract very interesting stories” from his subjects, the stories published on “Humans of” pages “resonate with thousands” in a few seconds, despite being very personal, said Hajer Awatta, 28, an urban researcher at the nonprofit Takween.

Part of the allure of Humans of New York is Stanton’s ability to connect with people and the “general culture” of the city, she said.

“I think the stories behind the photos are often more intriguing than the photos themselves,” she said.

Mai Ali, 24, a freelance research and development professional based in New Cairo, ordered the book “Humans of New York” for her birthday. She said she finds the stories inspiring and that they connect people. Relating to people’s experiences that are similar to hers, she said she feels how people from different places have much in common in what makes them happy or sad.

“They show that despite cultural differences and space boundaries, at the end of the day we are all humans of this world,” she said.