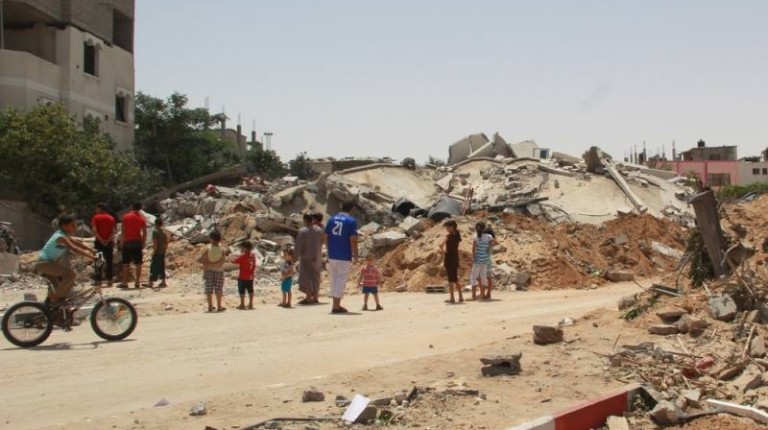 The United Nations Security Council called for “de-escalation” on Saturday evening, in the latest wave of the militarised conflict playing out in the Gaza Strip.

The council “expressed serious concern regarding the crisis related to Gaza and the protection and welfare of civilians on both sides”. It called for a return to the ceasefire brokered by Egypt and the United States in November 2012.

The Egyptian foreign ministry said it is in “around the clock” contact… “with all interested parties… represented by the Palestinian leadership, the Israeli authorities and various Palestinian factions”, including Hamas.

Ministry spokesman Badr Abdelatty stressed that Egypt’s main objective is to “stop the Israeli aggression” towards Gaza. He expressed hope on the possibility of a ceasefire, adding that the ministry is in contact with international actors to work towards the reinstatement of the 2012 agreement.

Isra Almodallal, director of the foreign affairs department at the Palestinian ministry of information, told Daily News Egypt that Hamas has no place in the government if it continues resistance.

Almodallal, citing a Hamas spokesman, said that Egypt and Turkey had “presented a ceasefire option” adding that Hamas refused to talk about the deal. Abdelatty said he did not have information on a ceasefire deal.

French Foreign Minister Laurent Fabius added his voice to those calling for a ceasefire on Sunday, saying that “this disastrous escalation must be stopped”. He added that France is “mobilised to help Israelis and Palestinians towards this goal”.

UK Foreign Secretary William Hague also urged a ceasefire in a Saturday statement, adding he expressed the UK’s “strong support for an active role in working for a ceasefire”.

Hague said he would discuss the situation in Gaza with US Secretary of State John Kerry, Fabius and German Foreign Minister Frank-Walter Steinmeier when they meet in Vienna on Sunday.

The foreign ministers of the Arab League member states are scheduled to meet on Monday night. Egyptian Foreign Minister Sameh Shoukry was scheduled to attend a summit to be held in Tunis relating to Libya’s border issues. Another ministry official was sent in his stead for him to follow the situation in Gaza and prepare for Monday’s emergency meeting.

Egypt’s foreign ministry urged the international community to take an active role in returning to the November 2012 agreement. This comes despite Israeli Prime Minister Benjamin Netanyahu vowing to continue with “Operation Protective Edge”.

Netanyahu said:  “No international pressure will prevent us from operating with full force against a terrorist organisation that calls for our destruction.”

Former United Kingdom Prime Minister Tony Blair met with President Abdel Fattah Al-Sisi on Saturday to discuss ways to de-escalate the crisis. The Foreign Ministry said on Friday that ten days of efforts attempting to end the violence were met with “intransigence and stubbornness.”