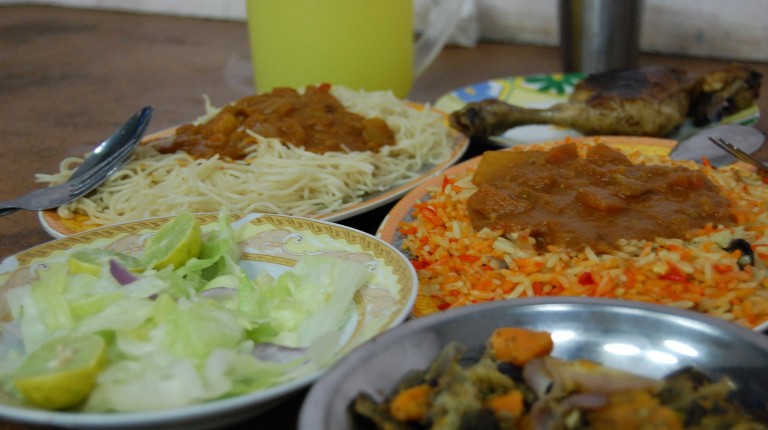 By Lucia Admiraal and Mohamed Anis

“Sure you want Somali food?”

It is not easy for some Egyptians living in Nasr City’s far end 10th district to believe that we are searching for a Somali restaurant. Why look for a nameless place and try unfamiliar food when Egyptian grill is within reach?

But after previously tasting some awesome peanut-aubergine salad and sour pancake bread at the Sudani Areej next to Dokki metro station we were hungering for more ‘southern’ food. So we headed to Cairo’s ‘city within a city’, its 10th district being home to many refugees from Sudan, Somalia and Eritrea.

Small stores carry signs saying ‘African shop’ or ‘bring all your spices here to grind’. A girl wearing a glittery baseball cap and bright coloured sneakers tells us where to go: a small Somali place a short tuk-tuk drive away.

We are late. Entering a small canteen-like restaurant Hamza Ahmed, a 27-year-old Somali refugee, hands us the last two pieces of samousa, the Somali version of Egyptian sambousek, pastry filled with flavoured meat and onion, while he returns to the kitchen to heat up the rest of our meal. In the meantime, we serve ourselves some refreshing pineapple juice from the fridge.

There is no-one else left in the bare space. A group of men sits outside on plastic chairs enjoying after dinner coffee. Soon Ahmed returns with red coloured rice and thin spaghetti, both with a vegetable sauce, sliced beef mixed with carrot, a piece of chicken and some salad with lemon.

We did not quite expect to eat spaghetti in a Somali restaurant, but this so-called bastoo is neither Mediterranean, nor a doubtful Egyptian Italian duplication to be found elsewhere. The sauce of tomatoes, onion, carrot and potatoes is deliciously flavoured with cinnamon, giving it an exciting sweet twist. Ahmed soon picks up our enthusiastic vibe and adds more sauce to the pasta.

The rest of the food is nice, but we secretly hoped to find the Somali bread that is said to be a fusion of the Sudanese and Yemeni pancake bread we have tried before. But as is the case with many small restaurants during Ramadan, the range of food is limited, Ahmed said.

With Ahmed we join the men outside for a coffee. How happy we are for kindly refusing Nescafe with milk and ordering Somali coffee instead: only this way we figure out the brilliant concept of adding ginger to spice up your coffee.

All the men here have fled from Somalia to Egypt over the last ten years. Most of them came on their own after traumatic experiences, with only some having found, often unofficial, jobs in Egypt. Among the young are many students of Arabic and Islamic law at al-Azhar University.

Ahmed arrived five years ago. He speaks positively about his experiences in Egypt so far and says he has been treated well – although many microbus drivers tend to be harsh and want him to pay more. He studied at Al-Azhar but soon dropped out because of personal circumstances.

But of course, when the conversation gets too personal, talk turns to a rather universal question: who is the best football player? Messi or Robben?

Price: EGP 35 including juice and coffee.

Atmosphere: Casual ‘canteen’ with self service for drinks.

Accessibility: Behind the “car market” in Nasr City’s 10th District, close to the Ezzat Ice-Cream Shop

Foreigner rating: Inspiring use of cinnamon and ginger.