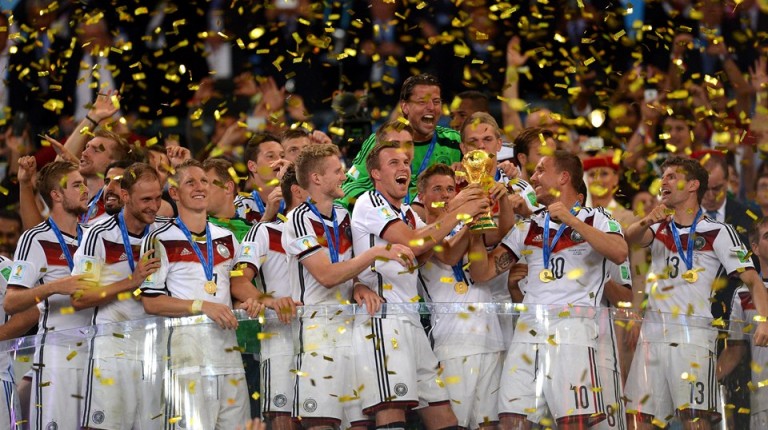 Coach Joachim Löw decided to bring in Mario Götze as a sub for Miroslav Klose in the 88th minute of the Word Cup final in Estadio do Maracana in Rio de Janeiro. This proved to be a golden substitute, as Götze shot the ball passed Sergio Romero in the 113th minute delivering his country its fourth World Cup.

The 22 year-old Bayern Munich striker is the first substitute to score in a World Cup final. Shortly after the match, he still could not believe the major achievement he and his team had just accomplished. “Andre [Schurrle] put in a superb ball and I was able to control it on my chest, then somehow the ball was in the net,” he told Fifa.com.

The 20th World Cup final, and the third between Germany and Argentina, showed two teams not afraid to attack, leading to a number of great scoring chances.

In the first 45 minutes Gonzalo Higuan missed a one-on-one with Manuel Neuer, while German defender Benedikt Howedes saw his header hit the woodwork. Argentina, the Tangos in Egyptian media, started strong in the second half with a big chance for Lionel Messi. Towards the final whistle the Germans, dubbed the Machines in Egypt, managed more and more to slight through the tough Argentinean defence.

However, after 90 minutes the score was still 0-0. During the first couple of minutes of extra time, both Germany (Schurrle) and Argentina (Rodrigo Palacio) were close to score the opener, giving the audience the feeling that the final would not be decided by a penalty shoot-out.

As Germany grew stronger, Argentina resorted to increasingly tough tackles to stop the German advance, with Captain Javier Mascherano arguably deserving a second yellow and German midfielder Bastian Schweinsteiger briefly taken off the field for treatment after a hit in the face by Sergio Aguero caused a bleeding wound.

In the second half of the extra time, it was the youngster Götze, dubbed Mariocana in a reference to the stadium by the German tabloid Bild, who sealed the fate of Argentina, making Germany the first European team to win the World Cup on Latin American soil.

The Netherlands and Brazil met Saturday in Brasilia to play for the bronze medal of the World Cup.

With Brazil still trying to digest their crushing 7-1 defeat to Germany in the semi-final, and the Netherlands facing the fact that after losing the penalty shoot-out to Argentina they could not possibly have been closer to the final, neither side seemed really eager to put much effort in securing the third place.

However, it turned out that it was the Dutch who wanted to end the tournament in style. Assistant coach of the Netherlands, Patrick Kluivert, had tried to motivate the team, speaking about his regret of losing the third place match with the Dutch team to Croatia in 1998.

He clearly succeeded. The match was only underway for 17 minutes and the score was already 2-0 in favour of the Dutch. Robin van Persie scored a penalty, after Arjen Robben was fouled, and Daley Blind shot a second in from the edge of the box.

The remainder of the match Brazil tried to make their final minutes in the World Cup at least a bit more bearable, but the Dutch defence proved to be defiant once more. When Wijnaldum scored even a third for the Netherlands in injury time, Brazil’s drama was complete. The pressure on Luiz Scolari’s team to win the World Cup in their own country was enormous, and in the last two matches the players collapsed under this pressure, collecting 10 goals.

The Dutch go home proud, with a team constituted of many young players from the domestic league, surpassing most expectations with third place and without being defeated. Thereby coach Louis van Gaal added another first to this cup’s list, substituting goalkeeper Jasper Cilissen for Michel Vorm, having seen all of his 23 players in the field during this World Cup.