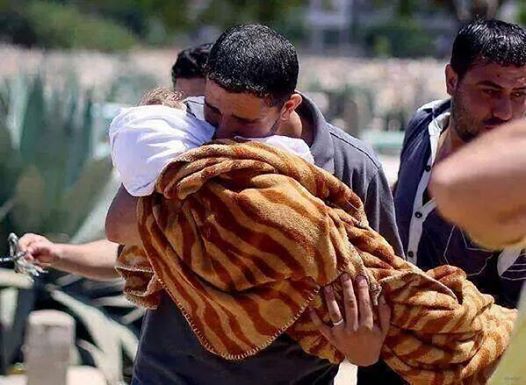 Tens of thousands of Gaza residents have been displaced, hundreds of thousands run at risk of losing access to water, while hundreds, mostly pilgrims, have crossed into Egypt, a week into the Israeli military operation in Gaza.

A report by the United Nations Office for Coordination of Humanitarian Affairs (OCHA) on the emergency situation in the Gaza Strip for Monday said that 77% of fatalities in Gaza are civilian deaths, according to preliminary figures.

According to Gaza health officials at least 190 have died since 7 July, when the Israeli military launched an operation in the densely populated Gaza Strip, to “stop Hamas rocket fire at Israel”. Over 1,400 have been injured.

The OCHA report stated that between Sunday and Monday, “tens of thousands of Palestinians in northern Gaza have fled their homes following Israeli warnings” and around 17,000 people have taken shelter at 20 UNRWA schools. “It is estimated that an additional 7,500 people have been displaced since the beginning of the emergency,” the report added.

The OCHA report said that while the “indiscriminate rocket firing into Israel by armed groups in Gaza” has not caused any Israeli deaths, “multiple reports about the launching of these rockets from densely populated areas have raised increasing concern. Such practice severely endangers the lives of Palestinian civilians residing in these areas, in addition to the Israeli civilians targeted.” The Palestinian rocket firing has caused injuries on the Israeli side, ranging from light to severe wounds.

Since the beginning of the Israeli military operation, Israel has hit more than 1,100 targets in the strip and more than 1,000 rockets have been fired into Israel.

The Israeli Defence Forces (IDF) claim that Hamas uses “houses as command centres” and that “Hamas operates from within densely populated areas and uses civilian structures as weapons caches.” The report said 1,255 Gaza homes had been destroyed or severely damaged.

Israeli NGO B’tselem said on Sunday that at least 52 civilians were killed when the “Israeli military bombed homes”. On Friday, International human rights watchdog Amnesty International said, in several incidents, that “no evidence has emerged to indicate that the alleged ‘Hamas operatives’ were inside the homes at the time of the attack, that the homes were being used to store munitions, or otherwise were being used for military purposes.”

Seven medical facilities were damaged since the beginning of the Israeli operation. “Two hospitals, four clinics, one treatment centre for the disabled, and four ambulances have sustained damage, while one doctor has been killed and 19 medical staff have been injured since the start of the emergency,” the report stated. It added that insecurity is undermining access to health services.

After three of its staff members were killed on duty, Gaza’s main water utility has suspended operations. This threatens to leave a third of Gaza’s population, up to 600,000 people, without water unless operations are resumed within the next few days, the utility has warned.

By Monday, around 680 had crossed into Egypt using the Rafah border crossing, with more than 530 of them being pilgrims on their way to perform Umrah in Saudi Arabia, state-run MENA reported. Around 150 of those who crossed are holders of foreign passports and are humanitarian cases.

The Palestinian Embassy in Egypt announced earlier this week that Egypt will open the border crossing for three days, Sunday to Tuesday, for pilgrims. Egypt exceptionally opened the Rafah border crossing on Thursday and Saturday, receiving injured people and allowing aid into the strip.