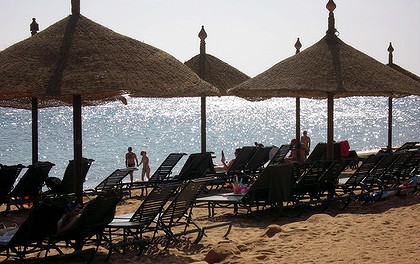 Tourist accommodation occupancy rose in the Red Sea and South Sinai by 70% and 55% respectively after Germany’s Foreign Ministry lifted its travel warnings to Egypt, according to Minister of Tourism Hesham Zaazou.

Zaazou added that the ministry is working to lift travel warnings from other European countries soon.

At a meeting of the Egyptian Association of Travel Journalists and Writers held Sunday, Zaazou said tourism figures have risen since the beginning of July 2013. He added that the figures in general are not up to par, especially after the protests at Rabaa Al-Adaweya in August 2013.

The Ministry of Tourism has made efforts to increase visitor rates to Egypt, exemplified by the increase from 300,000 tourists in July 2013 to 700,000 in January 2014, Zaazou said.

These numbers declined sharply on 26 February, after 15 European countries announced a travel ban to Egypt, after a terrorist bombing of a tour bus 10 days prior.

Travel warnings for Sharm El-Sheikh were, however, recently lifted for German visitors, which Zaazou believes “is a positive thing for the summer season”, adding that he expects other countries will follow.

He added that Egyptian tourism recovered quicker in the past due to most incidents being isolated. He said that incidents are now more diversified in impact and targeted areas, which has had a negative impact on tourism overall.

The Minister admitted that Egyptian tourism prices have fallen, “but nevertheless there is a demand and a continuous rise in the prices of Marsa Alam from $50 to $65 per person per night, which indicates that improvement in income is associated with a rise in demand.”

Coastal tourism represents one of the most important forms of tourism income for Egypt.

The main challenge with cultural tourism is incorporating out-of-the-box ideas into the product. The Ministry of Tourism must seek greater cooperation with the Ministry of Aviation in order to attract cultural tourists from distant markets such as Latin America and Southeast Asia, according to Zaazou.

The Ministry of Tourism is intensifying its focus on its 4 key markets in Western Europe—England, France, Italy, and Germany—while also focusing on the Eastern European market.

“The president is mandating ways for us to recover the tourism sector as soon as possible and to launch an international public relations campaign to improve the image of Egypt abroad, which would help tourism directly and quickly,” Zaazou stated.

A committee was formed coordinating with the Ministry of Communications and Information Technology to choose a company for promotion services to start working on the project in August 2014, said Zaazou.

Hossam Kamal, Minister of Civil Aviation, said domestic flight prices have been cut by 80%, where trips to Hurghada and Sharm el-Sheikh stand at EGP 760 per capita.

The Ministry intends to launch flights at the same price to Luxor and Aswan, while the rest of the flights to tourist areas will be EGP 1200 per capita, according to Kamal.

He also stated that prices for international routes for Egypt Air will be low and competitive with other airlines.

The Ministry of Aviation plans to open a new New Delhi route in October, to create seven flights between India and Egypt — three to New Delhi and four to Bombay.

According to Kamal, the tourism and aviation sectors support one another through promotions and discounts offered by the Ministry of Aviation.

The Ministry of Aviation is launching a new route from Egypt to Lisbon, Portugal in mid-October, in efforts to increase tourist traffic from the country.

Kamal stated that EgyptAir is doing its best to increase tourism through various projects, though he believes that funding is a major obstacle for the ministry. It is looking to sign the Cape Town Convention for the purchase of new aircraft.

“There is no restriction on private airlines working in domestic aviation,” according to Kamal.