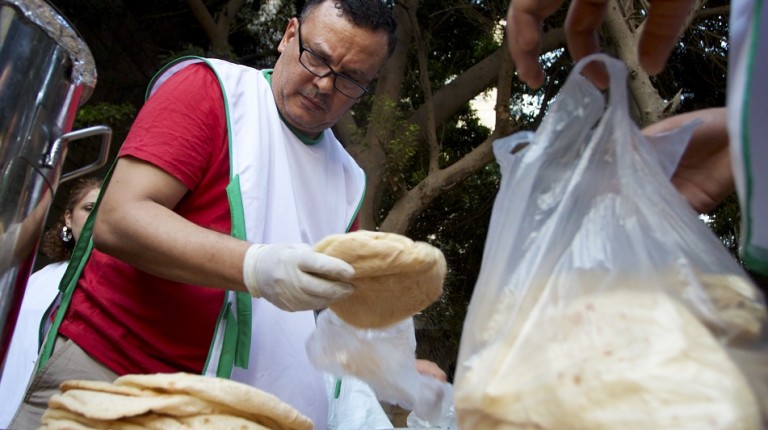 Some of Egypt’s Muslims break their Ramadan fast at home. Some break it with their friends at restaurants. Others go to a Christian church.

Kasr El-Dobara Church, widely known for providing medical services during the 25 January Revolution, is cooking up a free iftar for fasting Muslims every Friday and Saturday during Ramadan.

Relations between the two religions have been particularly strained since many Christians lobbied heavily for former president Mohamed Morsi’s military-backed ouster last summer. Following the Islamist president’s fall from power, more than 100 churches across the country were bombed and burned. Hostilities, including sectarian violence, harassment of women for religious dress, and mob attacks, have been on the rise since 2011, according to the Pew Research Center, which ranks Egypt among the worst in the world for government-imposed religions restrictions.

“We are driven by the loving spirit of Jesus Christ,” he said. “The church will not watch poor Muslims starve. We are one family.”

Egyptians have managed to get along for thousands of years, he said. Violence against Christians, which he called “extremely rare”, is driven by a “hidden agenda to disturb our harmony”, he said.

“It is important to forgive whoever did this,” he said.

Each Friday and Saturday, church chefs cook 200 meals, costing EGP 36 each, Wahib said. Sixty meals are delivered to poor families. One hundred and forty are served up on the side of the road to whoever needs a bite to eat.

The church sets up eight wooden tables on the sidewalk at Simone De Beauvoir Square next to Kasr El Dobara Church. People start taking their places at 6.30, just 30 minutes before the city’s mosques begin the call to break fast. As the sun lowers in the sky, Christian volunteers dish steaming hot grilled chicken, rice, and potatoes onto Styrofoam plates.

The church limits the meat it serves to chicken, to make it clear to its Muslim guests that they would not serve pork, which is forbidden in Islam, said Wahib. The meals are funded by church donations, he said.

“Growing up, the terms Muslim and Christian never mattered,” said AbdelHakim Selim, a 49-year-old Muslim taxi driver who ate iftar with the Christians. “We are one. It doesn’t matter if the food was made by Christians. God will reward whoever provided this.”

AbdelHakim said that he would come again if his taxi route brought him to the area.

“It was delicious,” he said.