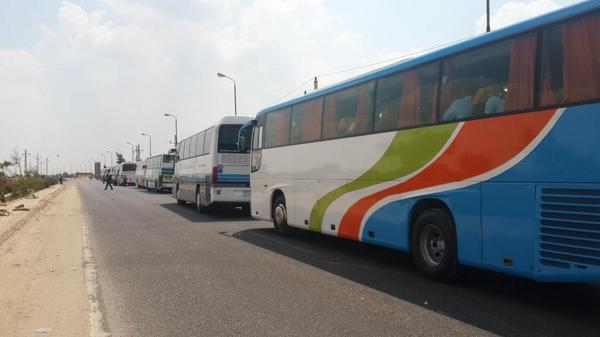 An aid convoy headed for Gaza was stopped at the Balouza security checkpoint in North Sinai and forced to turn back Saturday afternoon, several kilometres from the Rafah border crossing.

The 11 vehicle convoy was to deliver food and medicine to the besieged Palestinian city of Gaza.

The Israeli Defense Forces (IDF) launched a ground invasion of the Gaza Strip on Thursday night, almost 10 days after the start of its offensive on the strip. The offensive has thus far left over 300 Palestinians and at least two Israelis killed.

Tarek Al-Awady, of the coordinating committee of the Popular Committee to Support the Palestinians’ Uprising, said military personnel at the checkpoint halted the convoy. The personnel initially told the convoy only medicines and food would be allowed into Gaza, adding that they would be forced to turn around and head back.

A military source said the convoy was stopped to be “searched” by security forces, adding that the delay in allowing the convoy to pass was due to its large size.

“This [procedure] is logical and normal,” said the military source, who spoke on condition of anonymity.

After participants in the convoy failed to negotiate their cross over, they decided to turn back. Al-Awady said military forces asked them to hand the aid to the health ministry’s headquarters in Ismailia, but the convoy decided to return to Cairo with the aid.

The aid convoy departed Cairo from outside the Press Syndicate in downtown Cairo on Saturday at dawn. Al-Awady, who helped organise the convoy, said it was escorted by security forces since its departure, adding that security forces facilitated the convoy’s travel through the Suez Canal.

“They then stopped the convoy at the Balouza checkpoint for two hours under the pretext that they are waiting for security forces to escort them into Rafah,” Al-Awady said, “Two hours later, the participants in the convoy were told they cannot cross over since they don’t have a permit. When the participants protested the decision, security forces raised their guns at them.”

The aid convoy was organised by the Popular Committee to Support the Palestinians’ Uprising alongside other political movements including; Al-Dostour Party, Misr Al-Qawia (Strong Egypt) Party and Al-Tayar Al-Shaaby (Popular Current).

Al-Awady said that the medicines transferred have been approved by the Ministry of Health.