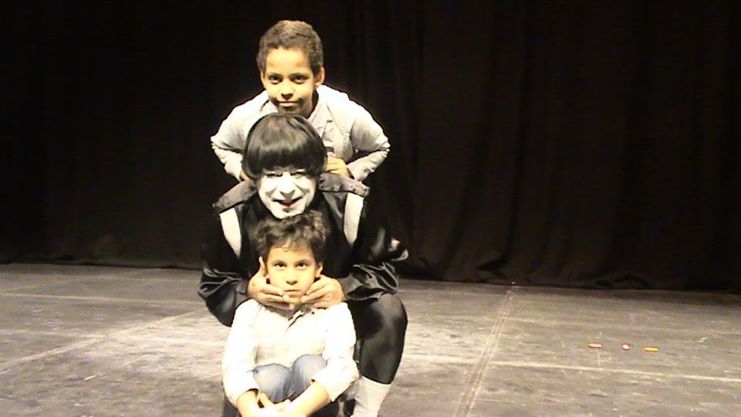 With a distinctive black outfit, white facemask, red nose and silky wig, Ahmed Nabil has represented a wide range of characters on many local and international theatres all over the world.  Depending only on his body language and facial expressions, he can impersonate the naïve bus thief, the cheerful balloon seller, the troubled ambassador, the clever surgeon and many other characters without saying a word.

Nabil, Egypt’s first pantomime artist, has been ranked among the best 20 pantomime artists in the world. The 68-year-old uses his talent along with with a unique sense of humour to tackle social issues, including the bright and tragic sides of the 25 January Revolution, hoping to spread love, peace and brotherhood between Egyptian citizens, regardless of their different ideological and political affiliations.

Nabil, 68, has been interested in miming since he was a small child, when he used to perform shows and plays without speaking, using only gestures, expressions and body movements. However, he wasn’t aware of the different aspects of the pantomime art until he met an American orientalist who used to perform pantomime plays. He accompanied him to the American Library and brought him books about the art and advised him to travel to Europe to learn it properly.

“Pantomime mustn’t be confused with silent acting that was first introduced during the old days of silent movies and depended mainly on accessories and decorations that could help the artist deliver his message to the audience,” Nabil said.

On the other hand, pantomime depends only on the artist, who stands alone on the stage with a black curtain behind him and slight usage of short music audios. In pantomime, the artist carries the responsibility of reflecting the place, the timing and the emotions to the viewers without any external help, he added.

Ancient Egyptians were proved to be the real inventors of pantomime art, as they were pioneers in medicine, engineering, musical instruments and many other fields. On the walls of the Pharaonic temples in Edfo and Minya, you can find a lot of pictures that represent how Pharos used pantomime to reflect their celebrations and spiritual rituals, he said.

In 1972, Nabil obtained a scholarship for directing pantomime shows in the former USSR, and by the end of this scholarship, he was ready to participate in an international pantomime competition where he was ranked 3rd out of  44 competitors from around the world.

After returning to Egypt, he decided to shoulder the responsibility of spreading this innovative art. Thus, he started presenting pantomime shows on Egyptian television and performing plays in the Opera house as well as many other Egyptian and foreign cultural centres. He also devoted himself to teaching pantomime at the Alexandria University and the American University in Cairo. However, he was eventually shocked by the ugly truth.

“No one appreciates pantomime in Egypt and most people have no idea about it. The government doesn’t allocate any budget for pantomime artists, and unfortunately, teaching pantomime isn’t even included in the curricula of the High Institute of Performing Arts,” he sorely added.

Nabil struggled many years to spread this art in Egypt, but his efforts appeared to be in vain. He tried to form a pantomime theatre troop, but the artists left when they found better opportunities with higher salaries. He tried to provide training workshops in cultural centres and Al-Sawi cultural wheel, but most individuals stopped attending because they couldn’t pay for the fees.

Although former Culture Minister Farouk Hosni paid attention to him and allowed him to represent Egypt’s name in many international modern dance theatre festivals, this wasn’t an effective way for increasing Egyptians’ awareness regarding this art on a local scale.

“I was honoured in many international festivals and I received many certificates of merit from different Arab and European countries like Oman, Bahrain, Germany, India, Australia, Russia and Italy; however, I feel deep sorrow inside my heart when I see my art completely neglected in my own country,” he asserted.

Nabil said that his older son refused to follow in his steps, although he was very talented at pantomime. “My son decided to stop learning pantomime and study engineering, as he experienced how pantomime doesn’t receive any appreciation in our homeland,” he added.

After long years of struggle and hard work, Nabil decided to quit performing pantomime shows in Egypt. “The Egyptian art scene witnessed [a] huge regression in all fields. Nowadays, artists care about money more than the value of the roles they play or the content they present. Cinema and drama scripts are full of insults and sexually abusive expressions. Ballet, folklore dance, pantomime and many other important arts are suffering badly on the verge of extinction,” he said.

Nabil believes that paying more attention to pantomime will contribute to improving the audience’s artistic taste.

“Pantomime combines acting and ballet and it defeats the language barrier, as it finds its way to the audience from different nationalities. I think television must spotlight on the unpopular arts in Egypt and raise citizens’ awareness about them,” he said.