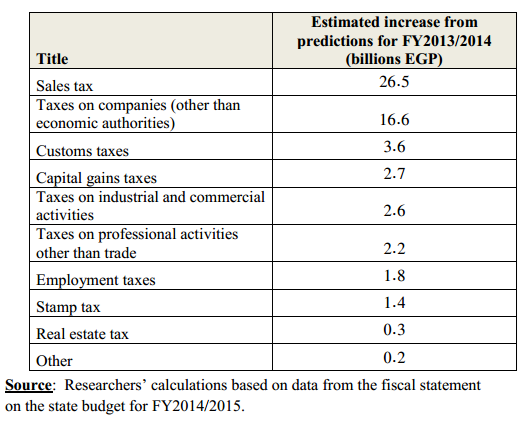 The Egyptian Initiative for Personal Rights (EIPR) heavily criticised the fiscal year (FY) 2014/2015 state budget in a report issued Sunday, saying it does not protect those most in need.

The initiative said that measures taken to reduce the deficit did not take into account “the goals of achieving social justice, increasing rates of economic growth and employment, and ensuring cross-generational justice by limiting the rise of public debt.”

The personal rights organisation noted that the austerity measures rely on cutting spending on subsidies whilst failing to create an alternative system of social protection and security. The report added that directed revenues are mainly based of sales taxes, which will lead to inflation and more hardship for the poor.

EIPR noted that despite moving in a positive direction, the government’s intentions to increase gains taxes and broadening the base of direct taxes remain “limited and fails to implement a progressive tax”.

The organisation’s report added that the new taxation system does not include “a fundamental change in tax policy, as it continues to defer to the economic interests related to those classes which enjoy a greater ability to influence policymakers”.

The total expected expenditure is EGP789bn and total revenues are expected to reach EGP549 bn. The approved budget has witnessed some adjustments from the draft that was sent to presidency on the first day of elections. In the draft, the targeted revenues were around EGP517bn while the expenditures were EGP807bn.

EIPR cited the growing budget deficit and debt as economic dangers; but said tackling these should not come at the expense of ignoring the structural flaws in the budget and the exclusion of other objectives.

“Alternative ways to stimulate the economy must also be considered, rather than solely imposing severe austerity measures,” the report read.

The report added that increasing energy prices for fuel-intensive facilities was a response to demands for social justice. It mentioned, however, that “the highest rate at which fuel prices have increased belongs to fuels related to the sectors of public transportation and transportation of goods”.

In the FY 2015/2015 budget, the government has reduced expenditures allocated to petroleum subsidies by EGP44bn compared to last year’s budget.

“The greatest price increase was that of the petroleum products which most affect the poor and those most reliant on subsidies to help them avoid the major negative impacts of price increases,” the report added.

The report also tackled the transparency issues, stating: “The fiscal statement on the state budget for FY2014/2015 is laden with problems related to transparency, some of which have been inherited from the past and some of which stem from the circumstances in which this budget has been issued.”

In April, EIPR issued a joint statement with several civil society organisations requesting the interim government publish the proposed bill for the state’s budget. The statement added that the finance ministry refrained from publishing the draft on 1 April, which constitutes a failure in addressing its legal obligations.

EIPR added that the budget was issued “in the total absence of a parliament or any other mechanism for public oversight and participation, despite the budget’s inclusion of measures which carry the most serious repercussions for the Egyptian economy seen in decades.”

Discussing the budget’s objectives, the EIPR report mentioned that the main goal was to reduce the budget deficit, reflecting in the state’s structural and financial estimates

The organisation stated that the budget suffers from “fundamental problems related to transparency in terms of its structure, preparation and implementation”.

The report said that the money allocated for education is 3.9% of the gross domestic product (GDP) and 11.9% of expenditures. It added that these figures fall short of the constitutional obligations of the government, which is to allocate around 6% of the general national product (GNP).

In its concluding comments, the report indicated that social justice was not “the determining factor in drafting the budget”.

The report added that the spending items “did not reflect a clear trend towards justice and towards reformulating the role of the state in providing the rights to education, health, and social security with all its components.”