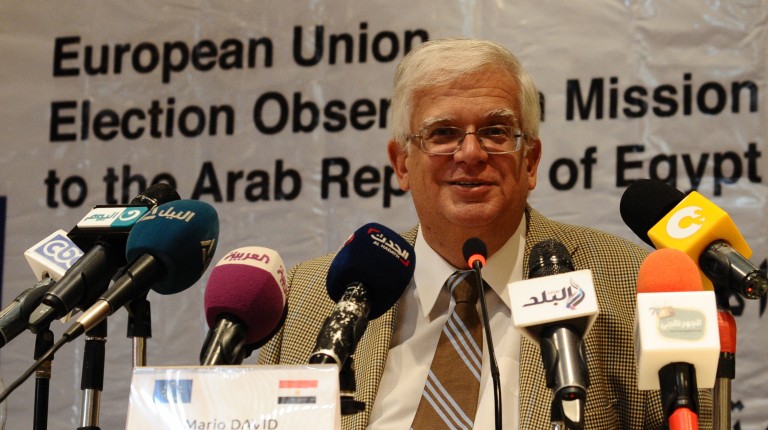 The European Election Observation Mission (EUEOM) presented its final report on Egypt’s presidential elections including recommendations on how to improve the electoral process for future elections.

Chief Observer Mario David said in a Tuesday press conference that the final report, like the preliminary report presented in May, indicates that whilst the election was held in line with the law it “fell short of constitutional principles”.

Speaking to Daily News Egypt David said: “Egypt has one of the best constitutions in the world but some of the articles are not yet properly translated in the same spirit as the constitution and are not yet enshrined in executive legislation”.

David pointed to the controversial Protest Law as one issue, adding: “we would be very happy if the society in Egypt would engage in a revision” of the law. The report itself recommends a discussion on the law and to ensure “the right to fair trial and due process” and also to ensure civilians are not tried in military courts. The report also called for the “implementation of constitutional provisions, ensuring full respect for fundamental freedoms”.

The 51-page final report, which has been handed to the election administration and the Egyptian government, included 10 short-term recommendations and 23 longer-term recommendations. The longer term regulations would require “legislative action” and they “aim at enhanced public trust, pluralism and universal participation in the overall political process as well as the conduct of future elections”.

David said the authorities confirmed that “different bodies would study the recommendations”, adding that the EUEOM would be open to a dialogue on the report.

David also held a round table with civil society organisations on Tuesday morning to discuss ways to implement the EUEOM’s recommendations.

When presenting the report, David pointed out some recommendations that could “be implemented without amending current legislation”. These included ensuring “the right to vote for persons turning 18 before or on election day, persons in detention awaiting trial and persons with disabilities through making polling stations more accessible”. The report also indicated that improvements could be made to “enhance the secrecy of the ballot” and “transparency of voter registration”.

The EUEOM report, while emphasising that it is a sovereign matter, said that “consideration could be given to enhance pluralism through proportional list representation, rather than the ‘winner takes all’ list system’”.

The report highlighted the need to ensure the role of women in all parts of the electoral process. This would include “ensuring that women are able to and do effectively register and obtain an ID to be able to exercise their right to vote.” The recommendation also calls for authorities to introduce “legal obligations to promote greater inclusion of women in elected office”.

Another issue highlighted in the report was the disparity between the funding of the two campaigns, which the mission identified as not being equal. One of the longer term recommendations is for the “revising of campaign financing regulations in order to promote a level playing field”.

David said that while no invitation to observe the parliamentary elections had been extended he said that if one was to be extended the EU would consider dispatching another observation mission.