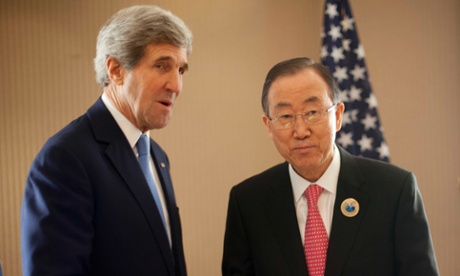 United States Secretary of State John Kerry and United Nations Secretary-General Ban Ki-moon voiced support for the Egyptian proposal for a ceasefire between Israel and Hamas in talks in Cairo.

Kerry arrived in Cairo on Monday night and held a meeting with Ban, who made a stop in Cairo as part of his regional tour to find a peace agreement with regards to the ongoing crisis in Gaza.

In a joint press conference, Kerry said the talks were held to discuss ways to “encourage the parties to embrace a ceasefire under the right circumstances”.

“We are both here in support of and in an effort to help get implemented the Egyptian initiative for the ceasefire. Israel and Egypt have encouraged that,” Kerry said, adding: “Hamas now has a decision. Only Hamas is out there awaiting the decision, and we hope they will make the right decision.”

Last week, the Egyptian proposal for a ceasefire was met with rejection from Hamas, the governing body of the Gaza Strip.

Ban said: “So many people have died… It’s very sad, it’s tragic. We have to do all what we can do. That is why I am here in support of the Egyptian mediation proposal.” He said he hoped that through his and Kerry’s visits in the region, they will “be able to help the parties to agree to a ceasefire in a reasonable form and immediately return to dialogue and address the root causes”.

Ban had said earlier on Monday: “We cannot claim victory by simply returning matters to where they stood before the latest terrible bloodshed.”

Similarly, Kerry said: “Nothing will be resolved by any ceasefire, temporary or long, without really getting to those issues at some point.”

Kerry announced that the US is providing $47m in humanitarian assistance to “try to alleviate some of the immediate humanitarian crisis”.

The ongoing crisis began on 7 July when Israel launched a military operation in the Gaza Strip. Fighting escalated on the night of 17 July when Israel launched a ground operation in the strip. Israel’s stated targets are Hamas members and missile stockpiles in the Gaza Strip. So far, the Palestinian death toll has passed the 600 mark and over 3,700 have been injured. On the Israeli side dozens have been killed, the majority of whom are soldiers.

Gaza, which is home to 1.8 million people, has been under siege since 2007 when Hamas seized the strip. Hamas has called for the lifting of the air, land and sea blockade imposed upon Gaza by Israel and presented this as one of its conditions to support the Egyptian ceasefire proposal. It presented its terms for a ceasefire to Turkey, Qatar and the Arab League and said countries are welcome to “move diplomatically and politically with the decision-makers including Egypt”.

However, Egyptian Foreign Minister Sameh Shoukry said in a joint press conference with Ban, earlier on Monday, that Egypt’s ceasefire proposal to end the escalating conflict will not be amended.

Ban is scheduled to arrive in Jerusalem later on Tuesday before going to Ramallah and Amman. Before arriving in Cairo, he held talks in Qatar and Kuwait.