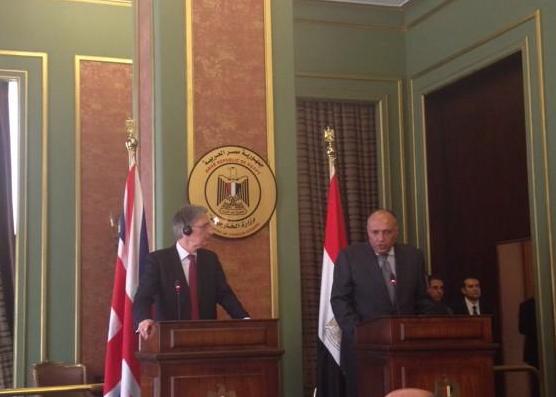 Hamas must agree to a humanitarian ceasefire without preconditions for the people of Gaza, United Kingdom Foreign Secretary Philip Hammond told reporters in Cairo on Thursday.

Hammond joined the string of foreign diplomats visiting Cairo amid Egypt’s efforts to enforce a ceasefire agreement it proposed last week to end the violence in Gaza.

The British foreign secretary said that the UK and the international community is determined to do whatever it can to end the bloodshed.

In a joint press conference with his British counterpart, Egyptian Foreign Minister Sameh Shoukry stressed that the Egypt-sponsored ceasefire agreement remains the one on the table.

Garnering wide support from most international mediators and initially approved by Israel, the ceasefire agreement was rejected by Hamas.

Osama Hamdan, who is responsible for external affairs in Hamas, said in a statement on Saturday that the Egyptian initiative was not in the interest of the Palestinian people and that there “was no serious initiative for us to accept or reject”. Egypt did not officially approach Hamas to participate in the agreement.

“Given the number of civilian casualties, Egypt values establishing a ceasefire to set a suitable environment for negotiations,” Shoukry said on Thursday.

The offensive has thus far left over 770 Palestinians killed and 4,750 injured, according to Gaza health ministry officials. The Israeli death toll meanwhile stands at 36, including three civilians.

Shoukry said that the ceasefire would eventually secure adequate living conditions to the people of Gaza and the Occupied Palestinian Territories in general.

Hammond said that rockets fired at Israel by Gaza’s governing body Hamas that target Israeli civilians were what triggered the latest offensive.

“Everybody in the UK and the west is appalled by the scenes coming out of Gaza,” Hammond said, adding that the sense of sympathy toward Israel is eroding fast with the increasing number of civilian casualties. “But every country has the right to defend itself against attack.”

Hammond’s meeting with Shoukry followed a meeting with Egyptian President Abdel Fattah Al-Sisi which the foreign secretary said involved discussing the latest happenings in Gaza as well as other regional issues.

United States Secretary of State John Kerry returned to Cairo on Wednesday night after a short visit to Israel and the Palestinian Territories. Kerry’s visit achieved no progress in regards to the Egyptian ceasefire initiative.

Kerry met with Israeli Prime Minister Benjamin Netanyahu and Palestinian Authority President Mahmoud Abbas. The Secretary of State stressed that his efforts aim at “creating a sustainable way forward for everybody” and not just brokering a ceasefire.

In a joint press conference with his Egyptian counterpart Shoukry on Tuesday in Cairo, Kerry said that the Egyptian ceasefire initiative is a framework to end ongoing violence in Gaza.

The Israeli Defense Forces (IDF) launched a ground invasion of the Gaza Strip last Thursday night, almost 10 days after the start of its offensive on the strip.

The ground invasion shortly followed an official rejection by Hamas of the Egypt-sponsored ceasefire agreement.