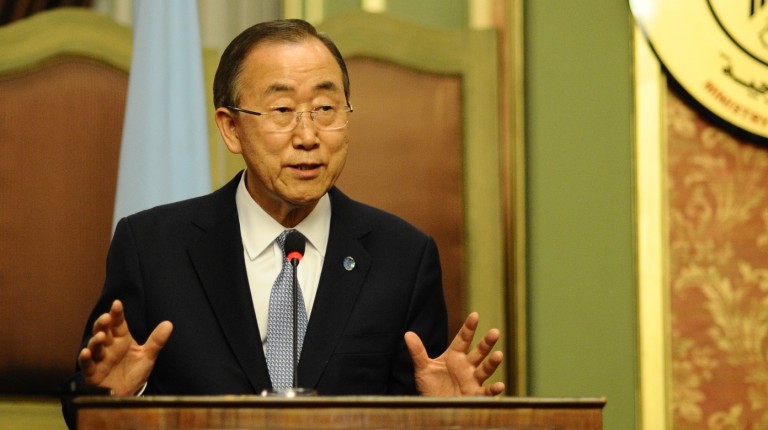 US Secretary of State John Kerry and United Nations Secretary General Ban Ki Moon are set to announce a new humanitarian ceasefire initiative in an attempt to kick-start negotiations for an agreement to “change the status quo” in Gaza.

Bassem Naim, a senior Hamas official, told Daily News Egypt that the UN and US were set to announce the new initiative later on Friday. He confirmed that the deal includes a 5-7 day humanitarian ceasefire and negotiations for a more permanent deal should start once all sides accept the ceasefire proposal.

Kerry and Ban met in Cairo on Friday along with Egyptian Foreign Minister Sameh Shoukry. Naim did not know the extent to which the Egyptian side was involved in the new proposal. The Egyptian foreign ministry spokesman was not available for comment.

Naim, adviser on international relations to Hamas Prime Minister Ismail Haniyeh said that the group is looking for a “change from the status quo” in the Gaza Strip. This is a notion that Ban called for during his previous stop in Cairo earlier this week and reflect by Kerry. The pair, along with other diplomats, has called for an initiative to address the “root causes” of the issues in Gaza.

Turkish Foreign Minister Ahmet Davutoğlu travelled to Doha on Friday to meet with his Qatari counterpart and “discussing with the Palestinian side the recent stage reached in the negotiations”. Hamas’ senior leadership are currently staying in Qatar.

The latest flare-up of violence between Israel and Hamas in the Gaza Strip began on 8 July and escalated into an Israeli ground offensive in the densely populated Palestinian territory. The ground offensive was launched after Hamas rejected a previous ceasefire proposal sponsored by Egypt.

As of Thursday the United Nations Office for the Coordination of Humanitarian Affairs (OCHA) had confirmed that at least 789 Palestinians and 37 Israelis had been killed since the start of Israel’s ‘Operation Protective Edge’ on 8 July.

Of the 789 Palestinians killed, 578 are civilians including 185 children and 93 women, according to OCHA. Two of the 37 Israelis killed are civilians and the remaining 35 are soldiers.

The Palestinian Ministry of Health said on Friday afternoon the death toll had reached 828.