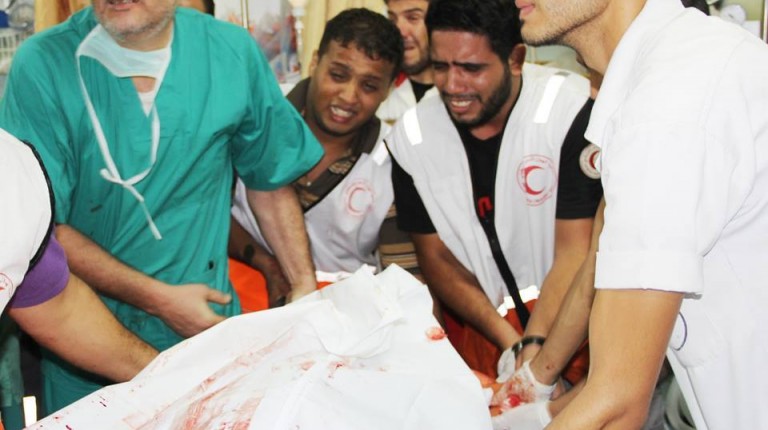 Palestinians in the Gaza Strip made use of a 12-hour ceasefire to return to the remains of their homes to recover dead bodies from under the rubbles of areas previously off-limits due to Israeli shelling.

Shelling has claimed the lives of over 940 Palestinians.

A temporary humanitarian ceasefire between Israel and Hamas entered into effect on Saturday 8am and was set to last until 8 pm the same day. The violence continued up until the hours leading up to the pause.

The overall toll also includes 85 dead bodies that Palestinian medics recovered from under the rubble after they were able to access areas inaccessible due to Israeli attacks, said the spokesman for the Gaza Ministry of Health, Ashraf al-Qidra.

More than 5,700 Palestinians have also been injured since Israel began its “Operation Protective Edge” 20 days ago.

Twenty-nine Israelis, three of which are civilians, have also been killed since 8 July. According to the Israeli military Hamas fired 1,700 rockets at Israel.

“From 8am to 8pm, there will be a humanitarian window in Gaza. During this time, we’ll continue to locate and neutralise terror tunnels,” the Israel Defense Forces (IDF) spokesperson said on social media.[e1]

“In the first five hours of the ceasefire people quickly began buying food and supplies which have been in low-supply for the past 20 days,” said Hany Al-Basoos, professor of political science at the Islamic University in Gaza.

“Many are also trying to catch up on sleep; people haven’t been able to sleep for a long time because of the sounds of the Israeli airstrikes and shelling.”

The al-Najjar family had previously fled their home after dozens in their neighbourhood were killed by Israeli artillery shelling.

“The Palestinian people really needed this ceasefire,” Al-Basoos said, “because the situation in Gaza at the moment is really awful, more than 200,000 people have become completely destitute. Many areas have been completely wiped out and people no longer have any place of accommodation, especially those from the Al-Shuja’iah neighbourhood.”

According to Ma’an, who cited Palestinian medical sources, the Israeli attacks on the Strip continued up until two minutes before the ceasefire began, as an 87-year-old Palestinian man was killed by Israeli shelling east of Rafah at 7.58am.

“Any attempt to take advantage of this humanitarian window to target the Israel Defense Forces or Israeli citizens will be met with a strong reaction from our side,” said spokesperson for Arab media, Avichay Adraee.

“During the humanitarian ceasefire military operations related to destroying the tunnels will continue,” Adraee also said.

Meanwhile in the West Bank, 11 Palestinians have been killed in the last four days in solidarity protests with Gaza, Ma’an reported. The Fatah-affiliated Al-Aqsa Martyrs’ Brigade as well as the Popular Resistance Committees al-Nasser Salah al-Din brigades, respectively, said they opened fire at Israeli forces in Qalandia checkpoint and near Nablus.

The solidarity marches were the largest in the West Bank since the Second Intifada.

“We don’t know yet what will come after 8pm but we are hopeful there may be a ceasefire for Eid,” Al-Basoos said. He also said he is optimistic that diplomatic talks in Paris may result in a more permanent solution for Gaza; one that maintains the breaking of the siege as a key part of any agreement.

[e1]Is this the spokesperson mentioned later on in the article?