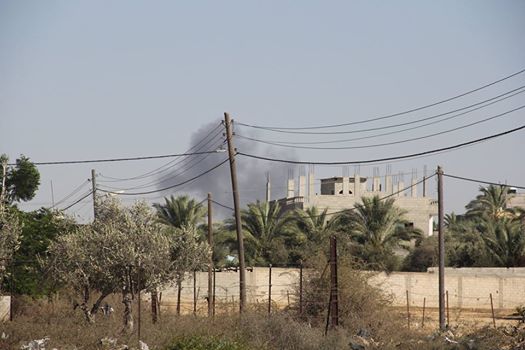 The United States, United Kingdom, Qatar, Turkey, France, Germany and Italy called for an extension of the 12-hour humanitarian pause which was observed from 8am on Saturday in the Gaza Strip.

French Foreign Minister Laurent Fabius said both parties are being called upon to prolong the ceasefire following a meeting of the seven ministers and France’s European Union representative.

The French foreign ministry said in a statement, the “meeting was held in support of initiatives, especially the Egyptian initiative”, which has been internationally endorsed as the basis of a ceasefire agreement between Israel and the Palestinian factions. Fabius said the ministers would meet again in a few weeks.

The diplomats hope that the humanitarian pause could lead to the 7-day ceasefire, which is scheduled to coincide with the Islamic holiday of Eid Al-Fitr, which marks the end of the holy month Ramadan.

Kerry stressed on Friday evening that Israel had not rejected the proposal, saying no official proposal had been presented.  He said that there is still some ‘terminology’ to be worked out for a ceasefire.

Turkish Foreign Minister Ahmet Davutoğlu and Qatari Foreign Minister Khalid Al-Attiyah met in Doha yesterday with Hamas leaders, who are currently residing in the Gulf State. Davutoğlu said on Saturday morning via social media that he welcomed the temporary ceasefire. He added, however, that “if the Israeli side expressed consent to the joint text… we could have been discussing a more solid ceasefire”.

Egypt’s initiative for a ceasefire was rejected by Hamas just over 10 days ago, with the group claiming it was not officially approached to participate in the agreement. Israel accepted the proposal and stopped its airstrikes on the densely populated Gaza Strip, although their forces resumed after Hamas continued to fire rockets into Israel.  Three days later Israel ordered a ground offensive in Gaza, citing Hamas’ rejection of the ceasefire initiative and the failure to maintain two humanitarian pauses.

Hamas has said that it would only accept a ceasefire agreement that guarantees the lifting of the air, land and sea blockade on the Gaza Strip that has implemented by Israel since 2007.

Shoukry insisted that there are no plans to amend Egypt’s ceasefire proposal and stressed that it protects the Palestinian people during a press conference with Ban earlier this week.

Hamas has said that it is “keen” on an Egyptian role in a ceasefire agreement; however the relationship between Cairo and the Gazan rulers has been increasingly strained since the ouster of former President Mohamed Morsi in July 2013. In March this year an Egyptian court banned the activities of Hamas inside Egypt and ordered the seizure of the group’s assets.