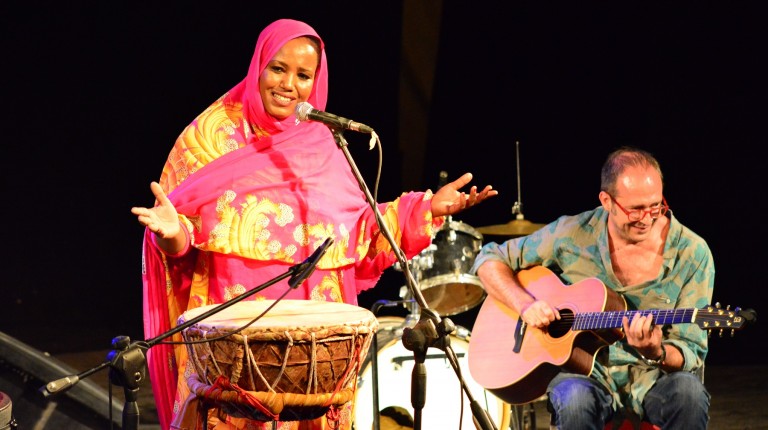 Growing up, Algerian musician Hasna El-Bécharia’s father banned her from playing the guitar.

“He said that it was only for men,” she said. “I used to wait until he is out and practice the guitar on the rooftop of our house.”

Radiating energy, El-Bécharia took the stage at El-Geneina Theatre, Thursday, at the ninth annual Hayy Festival, a series of concerts designed to promote female talent from across the Arab and African world in genres ranging from folk chanting to rock electronic music. The nonprofit cultural organisation Al-Mawred Al-Thaqafy crafted the festival, themed Feen Al Sanyora (Where is the Queen?), to draw attention to the lack of exposure of female singers in the region.

The theme originates from a sentence usually said in Egypt during games of Three-card Monte, where the dealer throws three face-down playing cards and asks players to find the Queen.

Every concert during the festival, which ran from 10 to 25 July, featured Egyptian opening acts, including Nesma Herky, Shereen Abdou, Sarah El Gohary, and Rasha Magdy. The opening acts usually serve as a source of publicity as the audience end up asking those young artists to perform once more in separate events, Moustafa said.

For the main acts, however, Moustafa said the festival aims to bring geographic diversity to its line-up. This year the festival brought together singers from Sudan, Jordan, Algeria, and Western Sahara.

The Hayy Festival organisers asked El-Bécharia to play the guembri, a three-stringed desert lute, also known as the sinter. The instrument is commonly used in gnawa music, based on African Islamic ritual spiritual songs and poetry.

Born in Bechar, a desert area in Southern Algeria, El-Bécharia grew up in a traditional environment. It was the men who were expected to take leading roles in ceremonies of religious chanting praising God, saints, and prophets, but she had a passion for the guembri.

She broke cultural barriers when she travelled to France in 1999 to perform in Cabaret Sauvage Paris.

Since then she has been one of the most prominent figures in the Gnawa music scene. Her status has seen her tour Europe and take part in the Gnaoua Festival of Essaouira and the Festival de Jazz à Vienne, releasing two albums in 2002 and 2010.

In addition to the guembri and the acoustic and electric guitars, El-Bécharia also plays the oud, bendir, and banjo. She mixes the traditional songs of the desert with electronic music, creating a distinctive style of Saharan blues.

At the festival, she took the role of the lead guitarist, supported by her band members, who played different percussion instruments, varying from drums to Krakebs to tabla.

Once El-Bécharia put down the guembri and took over the electric guitar, the band’s rhyme started to become louder and more appealing to the fans who answered her call to join her on stage and dance. The performance brought the audience to its feet, and inspired calls for several encores.

Braheim started her act supporting the calls of the Saharan people for independence. Performing for the first time in Cairo, her music blended Saharawi vocal tradition (using the sounds of tabla and her beautiful voice) with Spanish rhythms (depending mainly on acoustic Spanish guitars).

Born and brought up in the Saharawi refugee camps, she performed one of her songs lagi (I am a Refugee), expressing the frustration of being raised in refugee camps. She dedicated the song to the Palestinian people and refugees all over the world.