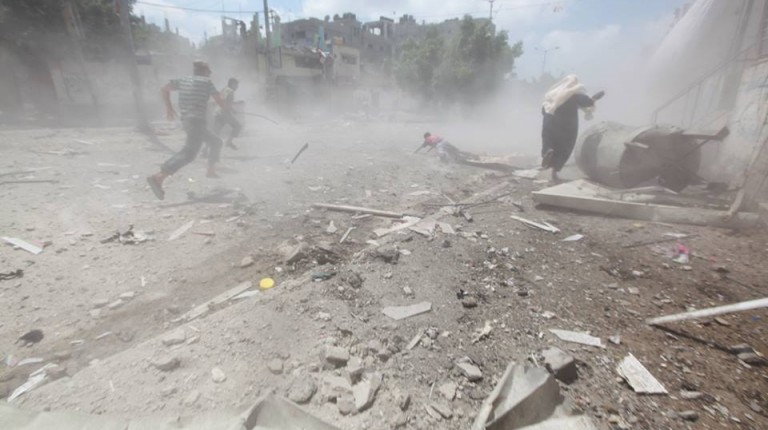 The Egyptian Ministry of Foreign Affairs strongly condemned “the continued Israeli targeting of innocent Palestinian civilians in Gaza”, and renewed calls on Israeli to exercise self-restraint, amid mounting civilian losses in the strip.

The death toll from the strike on a marketplace in Al-Shuja’iah neighbourhood in east Gaza has risen to 24 on Thursday afternoon, according to Gaza’s health ministry spokesman Ashraf Al-Qedra.

Egypt’s foreign ministry called on Israel in a statement on Wednesday to stop the “excessive and unjustified use of force which claims the lives of innocent civilians”, and does not “pave the way for the continuation of negotiations to reach a comprehensive and just peace settlement”.

A United Nations-administered school in Jabalia, in northern Gaza on Wednesday left at least 15 Gazans dead, including four children. UN Secretary General Ban Ki-moon commenting on this attack said: “I condemn this attack in the strongest possible terms. It is outrageous. It is unjustifiable. And it demands accountability and justice.”

Ban said “all available evidence points to Israeli artillery as the cause” and added that the precise location of this school had been communicated to the Israeli military 17 times, the latest being just hours before the Israeli attack. “Nothing is more shameful than attacking sleeping children,” he said.

He said families had been instructed to seek sanctuary at UN sites in Gaza. According to the UN News Centre, some 3,300 people had been seeking shelter in this school.

Some 240,000 Gazans are now seeking shelter in UN-administered schools and other public buildings after evacuation orders by the Israel Defense Forces (IDF) and damage or destruction of homes has forced them to flee their houses and seek shelter elsewhere.  It is believed that another 200,000 are seeking shelter at the homes of host families, according to figures by the UN Office for coordination of Humanitarian Affairs.

Last week, another UN-administered school in Beit Hanoun, northern Gaza, was struck killing at least 15 people and injuring more than 200. On Monday, the first day of Islamic holiday, Eid Al-Fitr, a strike at a children’s park in Al-Shati camp in Gaza killed 10 children. The strike was shortly followed by another one hitting the external clinics of Al-Shifa hospital in western Gaza.

The IDF claims that “Hamas hides their weapons in and fires from schools, hospitals and mosques.”

The IDF launched a military operation in Gaza on 7 July but the operation was escalated on 17 July when it launched a ground operation. Israel’s stated aim of the operation is to stop “Hamas rocket fire into Israel”. The IDF alleges that Hamas uses “houses as command centres” and that it “operates from within densely populated areas”.

After shelling Al-Wafa Hospital last week, the IDF said: “Because Hamas uses Wafa Hospital for military purposes, the IDF has targeted specific sites and terrorists within the hospital grounds.”

The death toll as of Thursday afternoon stands at 1,400 on the Palestinian side, while more than 8,200 have been injured. The death toll on the Israeli side has risen to 59, after three Israelis soldiers were killed on Wednesday. All but three of the Israeli deaths are those of soldiers.